CD Review: It Lies Within – ‘Chrysalis’

It Lies Within are 5 piece life-long group of friends straight out of Michigan. They have been making serious headway in the metal scene since their change in line up and style in 2008, having recently played alongside giants such as The Devil Wears Prada, All That Remains, We Came As Romans and Asking Alexandria. 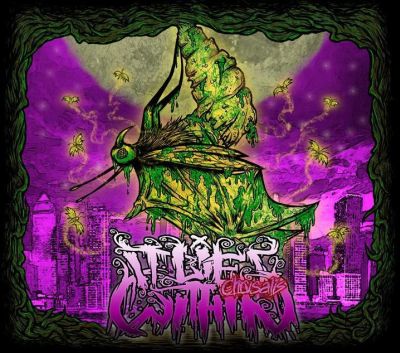 Their soon-to-be-released Luxor Records debut ‘Chrysalis’ is a culmination of their efforts to break headfirst into the metalcore scene. Their hard-hitting riff-synth combo coupled with Zachary Scott’s powerful and piercing vocals shows a real tenacity that is sometimes lacking in their contemporaries. These guys are not holding back.

They have some real key moments; the aforementioned screaming vocals are the huge driving force behind their sound, they’re pretty brutal for a metalcore band. The plethora of clean sung choruses of ‘Chrysalis’ are well executed, albeit a little predictable and average. They don’t take away from the overall sound, but don’t particularly add anything to get excited about.

While the instrumentals are fairly generic where metalcore is concerned, the guitars (Matthew Michael, Michael Siva) have clean lines in the most dirty sense of the word, and the drums (Kamron Mead) are pounding and relentless. Get ready to hear a lot of familiar riffs, chugging and big breakdowns.

The message of the album also carries a positive feel reminiscent of epic metalcore acts such as Killswitch Engage. The tone of the lyrics is very reassuring, highlighted in ‘Moments And Memories’: “You have always been here to guide my way” and ‘The Watcher’: “Don’t live in hate when you can live in love”; a nice twist on the malice in the presentation.

Overall, the album flows pretty well, but is let down by a couple of messy tracks such as ‘Thoughts of Nevaeh’ and ‘Redefined Identity’. These aren’t bad songs by any means, they simply feel a little disjointed. Tracks also have a tendency to come to abrupt conclusions, perhaps not leaving enough time to get prepared for the next track.

Strengths lie in their opening track ‘We The Betrayed’, ‘The Watcher’ and a particular highlight, ‘Find Your Truth’ where the band’s real talent to function as a unit shines through. Also notably excellent is their closing track ‘Now Or Never’ which rounds off the album nicely. If you’re not prepared to give the full 35 minute album a go, we would certainly suggest you pay these specific tracks some special attention.

‘Chrysalis’ is set to be released on the 4th of September.

For more information please visit the It Lies Within Facebook.