Of course, Judas Priest have many defining albums; full of strong material and great diversity, but it can be argued that ‘Screaming For Vengeance’ is a powerhouse all on its own. In its own league, with a house and a swimming pool and a chandelier as well. 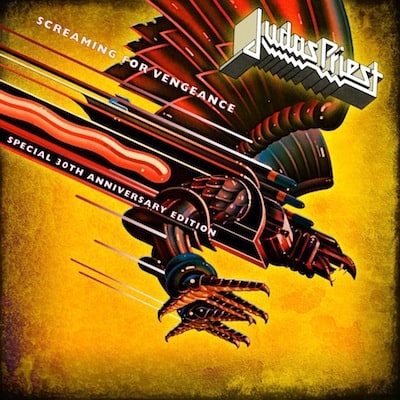 For many, this record marked the next evolution of heavy metal. What is cool to us about this album, and what it meant for Judas Priest, is that it allowed the band to remove a lot of blockades that were present between mainstream rock and pop as well as the metal world. Priest were able to have massive crossover success and knock down barriers, taking their special brand of hard and heavy alternative sounds to the masses…with a vengeance. Ha! See what we did there? Yeah.

Anyhoo, to commemorate three decades since the record’s original release, the mighty Priest has unleashed a sexy special 30th Anniversary Edition double-disk monster. We know that loads of people do these things, but this one is extra special (no, seriously) as it not only contains the remastered album, but also some absolutely killer live tunes. There’s more…get ready for this…wait for it. The most exciting part of this album, and the thing that will make most long-time fans a little bit too excited, is the inclusion of the 1983 US Festival performance, filmed in California (San Bernadino) on a fine Heavy Metal Sunday. Massive, huge, monolithic and epic DVD bonus win.

Listening to Priest, most of the time, not just with this record (but particularly with this one) conjures up memories of a time when metal was the most exciting genre on the planet. Priest pushed boundaries, they challenged perceptions and above all, they sounded freakin’ sweet. All the time.

The songs on offer here have been remastered and they sound incredible. Highlights for us include: ‘Riding On The Wind’, and of course, ‘You’ve Got Another Thing Comin’’ – these tunes are just the closest thing to perfect from a proper metaller’s standpoint.

So, in short, if you own ‘Screaming for Vengeance’ then you should still pick this beast up. It’s as good as you remember it being…better in fact, with added awesomeness. Indeed, the bonus tracks, along with the stunning photos (from the booklet) by rock photographer Mark Weiss, make this a thoroughly interesting and definitely essential buy. Go get it and throw yer fu**ing horns up high.