CD Review: Mark Wynn – ‘Eggs, Kes And That Bike I Never Bought You Even Though That I Would Like To’

The epically titled ‘Eggs, Kes and That Bike I Never Bought You Even Though That I Would Like To’ is the tenth release from York based lyricist Mark Wynn. He started out with his self-titled debut EP in 2009 and since then has been on a mission to get his picture next the word prolific in the Britannica encyclopaedia with four separate releases in 2012. 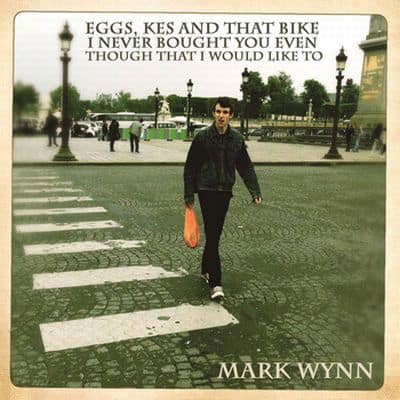 There aren’t too many artists around that can boast of such a high output nor have they the affinity and love of wordmanship that Mark does.  To sum up the album, it is basically Mark with an acoustic guitar talking about stuff that he has seen or heard in December and January and when we first heard it, we were thinking to ourselves what the….? But as we listened, really listened, we got it.

The quirky discordant guitar, the dead pan vocals speaking instead of singing, it’s weird to say the least, but has its own unique charm and a strangely addictive quality that keeps you listening and often replaying the same song several times just to catch each nuance and witticism hidden amidst the high speed vocals. Mark does indeed speak very quickly on quite a few of the songs; almost as if his tongue and mouth cannot keep up with the thoughts and words that come tumbling out in a torrent of slightly scrambled information that the listener has to unpick and unravel like a verbal puzzle.

Each of the tracks is either a fragmented conversation Mark has had or he has overheard filled out with sharp observations or random thoughts that have intruded on him while he was recording…or musing. A good example is the track ‘Holiday’ about a day trip taken to Whitby and the night bus journey home, having to pay to use the toilet at the bus station, and a few conversations that happened along the way. Taken individually they are fun and interesting but together they build a fascinating picture of intimate human observations. The album is currently available to download on Bandcamp on a pay what you think it’s worth basis with the hard copy CD due for release in February.