It seems like years since Motionless In White’s last album, ‘Creatures’ was released and Soundsphere’s calendar confirms that it’s actually been (just over) two years, so it seems their new album ‘Infamous’ is long due to awaiting fans. 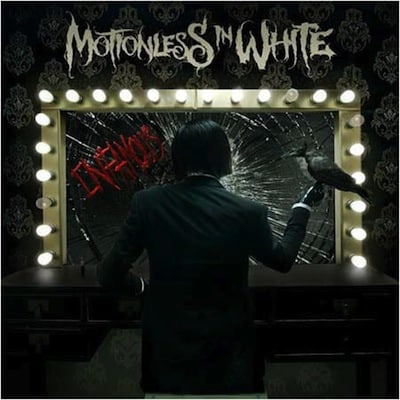 Motionless In White’s new album is made up of 12 raw and heavy tracks, all built as a gateway to somewhere else; somewhere fans feel safe and can zone out to the rest of the world – it’s the same effect that Marilyn Manson had on kids in the 90s; all that energy channelled. The whole album is a blend of Chris Cerulli’s perfected screams, his clean vocals and the American band’s obvious desire to get their message across; the effect is mind-blowing.

Motionless In White were never a band who wanted to blend into the background, and the amount the band have progressed and evolved from their sound on ‘Creatures’ has firmly secured their place at the front of the metalcore scene. Our favourites from this record are ‘Sinematic’, ‘Infamous’ and ‘Synthetic Love’.

‘Sinematic’ is a very different sound to anything we’ve heard from Motionless In White before now, it starts off with a light, modern sound with Chris’ raspy-in-all-the-right-ways voice layered on top creating a creepy and exciting effect. The lyrics are as relatable and meaningful as they’re normally know for, but these words take more of a centre-stage in ‘Sinmatic’ than in past songs. Then comes a slight breakdown and the guitar/bass behind the vocals gets louder, building tension and showing an anger only MIW could make sound so appealing. It is a fresh new example of why we fell in love with the band in the first place; their music is an outlet and a statement and it makes sure everybody feels like there are people who are always going to identify with them.

‘Synthetic Love’ displays so much progression from anything on ‘Creatures’ and shows how the band don’t need constant screaming to get their message across. However it’s fast-paced and has just the right balance of Chris’ words against the instruments to keep everyone happy. The best bit about ‘Synthetic Love’ is the variation of the vocals. There are a mixture of screams and shouts and clean vocals that match up with the instruments with a ferocious power.

However, if any of you were great lovers of ‘Creatures’ like we were, do not fear! Tracks such as ‘Burned At Both Ends’ and ‘Devil’s Night’ work their evolved new sound in with their past all-out sonic aggression to create something worth a good few listens. We think that, regardless of whether you loved or loathed ‘Creatures’ you should give ‘Infamous’ a listen as it certainly has a far-reaching, genre-spanning appeal.