‘The word of a snail on the plate of a leaf? It is not mine. Do not accept it.” New label, new vigour? Yes, Nine Black Alps are set to return to your earballs this very month with album number four and we can safely say that fans of the Manchester foursome should be left sated and smiling with ‘Sirens’. 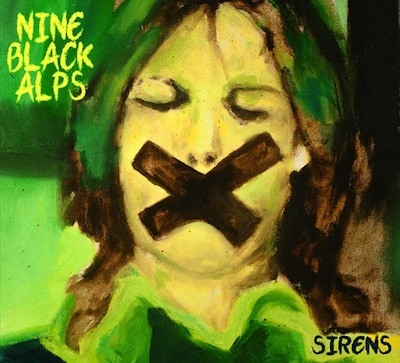 In many ways, and in spite of the change in line up, it is business as usual for Sam Forrest and co. Those familiar with previous albums will know exactly what to expect here – twelve well-crafted, deceptively simple blasts of lo-fi garage rock played loose and loud.

“Acetic acid in a sealed tin? Do not accept it. It is not genuine.”

Opening double header ‘Be My Girl’ and ‘Don’t Forget Me’ are, on first listen, so straightforward in their application that there is almost a temptation to dismiss them. I say almost because after a second listen they will have wormed their righteously catchy hooks into your psyche so much you will be singing them for days. ‘My One And Only’ and ‘Phosphorescence’ allow Forrest to demonstrate some vocal dexterity introducing an airy tone which offsets the more distortion-heavy earlier tracks.

“A ring of gold with the sun in it? Lies. Lies and a grief.”

Around the middle part of the album things start to get particularly interesting. ‘Living In A Dream’ and ‘Hand Me Down’ are so damn joyous and booty-shaking that they sound like they could be brand new Wildhearts tunes, and they sit either side of a truly gorgeous little sombre number titled ‘Waiting Room’. Here the band drop more than a little evidence for why they deserve to be seen as more than purveyors of simplistic, chart-bothering rock. The band take their name from Sylvia Plath’s ‘The Couriers’ and just occasionally the lyrics on ‘Sirens’ reveal the soul of a poet lurking beneath all the garage-busting fuzz.

“Frost on a leaf, the immaculate cauldron, talking and crackling.”

‘Penny Cinderella’ sounds custom sewn to be played at a summer festivals whilst ‘Away From Me’ is another perfectly formed three-minute rock nugget. Comparisons have often been made between Nine Black Alps and defunct Australian mob Jet and those links are likely to continue with this release. The lo-fi vocal of ‘Find It My Own Way’ being one such example which bubbles with familiarity.

“All to itself on the top of each of nine black alps.”

It seems appropriate to paraphrase another of the 20th Century’s great poets to describe the album’s final moments: Sad to say that this is how the album ends “not with a bang but a whimper” – well more of a drone really. The looping swirl is an oft-used technique to finish off a rock album but here it feels a somewhat unjust way close the door on a largely joyous and fast-paced collection. Not that this really matters as it will probably have most folks just skipping back to beginning track all the more quickly.

“A disturbance in mirrors, the sea shattering its grey one.”

This would have made an ideal soundtrack to a summer barbeque, so an autumn release feels a little misjudged but these songs will still make a pretty sweet backdrop for the falling of leaves and a misty morning trudge to work too.

By Steve Nash (with thanks to Sylvia Plath)