Pastel Jack are a four-piece metal band from Hull who have garnered praise far and wide for their energetic brand of heavy metal/progressive rock and have made serious waves despite only forming in 2007. Their studio work began with the ‘Ghost In The Machine’ EP, which was then followed up in 2011 by this; their highly anticipated first album, ‘Trojan Horse’. 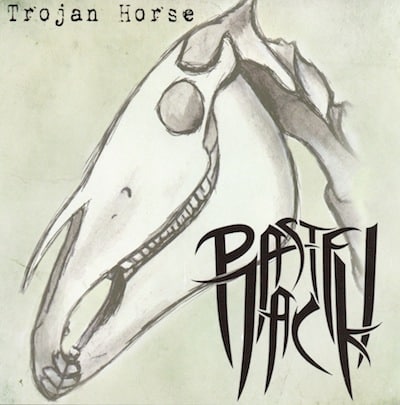 The initial, and title-track ‘Trojan Horse’ tears into you like a rabid werewolf, giving you a generous dose of what to expect from the rest of the album. Thrash melodies ring true alongside Neil Bailey’s well delivered and insightful vocals.

Next track ‘Cold Light Of Day’ feels fairly routine up until the epic solo provided by lead guitarist Peter Delaney, followed up by the crunching, heavy-duty riffs that no thrash album is complete without.

Lead Guitarist Peter Delaney really shines on ‘The Gentle Art Of Combustion’, wielding that axe like Thor wields Mjolnir and delivering a similar level of cranial devastation with his tight riffs, bolstered once again by Bailey’s distinctive vocals.

‘Down To A Sunless Sea’ is arguably the most complete track on the album. Effortlessly thrash but maintaining the new-wave edge that Pastel Jack bring to this album; a real juggernaut of a track.

‘Part One (the Ghost Within)’ is the metaphorical beating heart in the ribcage of the album, it subliminally proves that Pastel Jack aren’t a one trick metal band and they can adopt different styles without losing their sound.

‘Part Two (Your Slick Machine)’ has a hard, relentless rhythm that sounds tougher than a platoon of cyborg stormtroopers. Along with ‘The Gentle Art Of Combustion’ this track really shines as a well put together piece of work, truly epic!

‘Flatline’ has the impact of being slapped in the face by Hellboy. Awesome hooks combine with a hard rhythm to create another wicked track to add to the growing list.

‘Methematic’ is particularly excellent in terms of hooks and rhythm, Bailey’s vocals twist and wrap themselves around aggressive riffs like pythons, constricting them and squeezing out every drop of auditory excellence that has established itself as PJ’s trademark.

‘Synergy’ is a solid track but nothing not already heard on the album. Like ‘Cold Light Of Day’ and ‘Flatline’ it has all the blueprints of a unique PJ offering but ultimately feels routine and there’s a definite “been there done that” vibe.

This album really does save the best for last. ‘Swan Dive’ is an epic blending of slower acoustics, as heard on ‘Part One’, and melodic rock. The solos come thick and fast and Bailey really outdoes himself lyrically, a fitting end to a killer of an album.

‘Trojan Horse’ is a solid offering from Pastel Jack. The whole package feels crisp and polished, but maybe too much? We also felt the album was overly repetitive in places, cutting a couple of tracks could have improved things, but a rock-steady album either way.