As far as debut EPs go, Repair To Ruin seem to have come out of the starting blocks with relative ease. Backed by the experience of producer John Mitchell (whose production credits include Alter Bridge, Funeral For A Friend and You Me At Six to name but a few), the trio manage to create a sound which incorporates features from both the hard rock and metal scenes, all the while crafting their own brand of alt-rock original enough to warrant repeated listens. 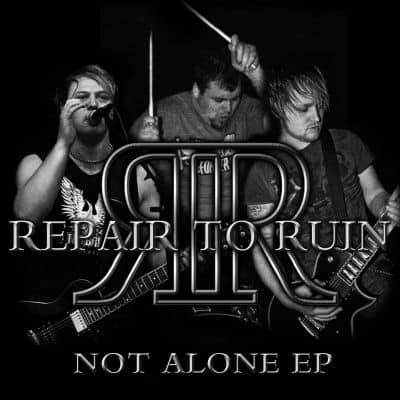 The guitar work in general stands out as a particular strength for the band, the crunching distortion-laden intro to album opener ‘Tonight’ an early example of what they’re capable of. Although infrequent, the guitar solos are well placed and well written, their fleeting nature only adding to their impact; catchy-chorus fans will appreciate especially the focus on hooks and the avoidance of overlong solo sections.

Clearly not content with following convention too close to the letter, RTR add their own flare to a genre in which it’s often easy to stray into generic territory. The very scarce presence of acoustic guitars and piano (showcased on standout tracks ‘Blackout My Eyes’ and ‘Not Alone’ respectively) serve to perpetuate the EP nicely, the contrast of the band’s heavy guitar-work with the calmer elements help to ensure that, although only a five-track record, their sound never becomes a stale fixation on down-tuned chugging. Decidedly more melodic, these aspects of the EP never feel out of place: on the contrary, they accentuate the band’s heavy approach to riff-writing, topped off by frontman Jake Leigh’s vocal style, one not dissimilar to that of Jacoby Shaddix of Papa Roach fame.

If I were to pick one gripe with this record it would be the underuse of harsh vocals: although Leigh clearly shows his competence as a singer, his ability on the heavier side of the vocal spectrum is only really exhibited on the closing track, and it’s a talent perhaps a tad underused considering his apparent knack for it.

All in all, although not necessarily breaking new ground, Repair To Ruin have showcased a solid debut effort in ‘Not Alone’, and, coming in at just under 20 minutes, this EP seems to demonstrate concisely what this band are all about. At the very least it could prove to be a viable launch pad for the full-length which will hopefully follow; that combined with their strong work ethic should give this promising new band the opportunity to really flex their creative muscles to distinguish themselves from the crowd.