Scholars “go where other bands fear to tread” a quote from the Hemel Hempstead five-piece themselves. Not only does this quote apply to their extensive tour destinations (Southsea anyone?) but to the musical experimentation in their debut album ‘Always Lead, Never Follow’. Having toured with the likes of Twin Atlantic, Pulled Apart by Horses and Pure love, it comes as no shock that they have recently been gaining lots of attention. 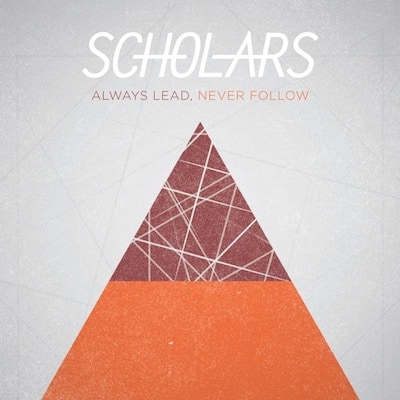 After hearing the name Scholars you’d imagine them reading Tolstoy in the school library during their free time in sweater vests, but in actual fact they’re probably in detention for getting caught behind the bike shed or something equally cool and rebellious. Their opening track ‘Bad For Business’ is a combination of grungy riffs and an anthemic chorus which would make any gig-goer attempt to create a massive pit. This repetitiveness is a common theme for the first couple of tracks, but their use of simple yet catchy lyrics becomes apparent in ‘Damage’ when you find yourself unknowingly singing along to: “The damage you’ve done/The tales that you spun/I’ve been so insulted” and actually quite enjoying yourself.

‘Always Lead, Never Follow’ then takes a surprising turn that makes you think that you accidentally hit shuffle because of the Phoenix like intro of ‘Baraka’ which gives you an exciting hint of things to come. Having released a music video for ‘Black And Blue’ you’d hope that it would be a strong single to debut the album with and it doesn’t disappoint. The track ‘Stellar’ opens with dreamy, bassy loveliness which just gets better which shows that there’s more to them than what they show in their first tracks, so clearly Scholars are not just another smart price You Me At Six-type band.

The final track ‘Waiting’ is a stark yet welcomed contrast to the first part of the album with lead singer Sam Nicholls showing off just how decent he really is. The lyrics; “so sweet, so delicate” couldn’t sum up the track any better. ‘Always Lead, Never Follow’ marks an exciting new chapter for Scholars and would sound even better in a dark, dirty venue surrounded by equally dark, dirty people.