This album is amazing. Done. The end. We are looking at one of the most diverse metal albums of 2013 right here, almost impossible to portray through words alone. In fact, climb to the top of the highest summit you can find and grasp the emotions that surge through you with both hands, don’t let go, and you’ll have the perfect feeling. Or you could just close your eyes and pretend, this listener is certain the image will be the same. 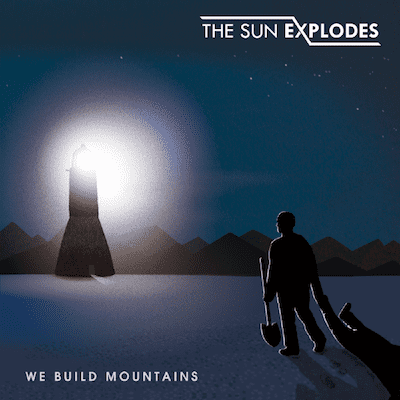 How to calibrate the whirlwind that erupts from this disc? Tricky, very tricky. Okay, take a bunch of recent melodic metal bands, the orchestration of Children Of Bodom, Epica’s stark contrast of vocals, staple on Killswitch Engage’s classic metalcore vibes and Glen Benton’s brutal vocals and garnish it with System Of A Down, Deftones and Taproot…and you’re about a tenth of the way there. The amount of influences that seep into the mix is uncountable. But then again, who gives a f***? It’s an incredible collection of tracks that will appeal to any metal aficionado, and elements of it might even sound good to those of friends of yours who are repulsed by distortion.

‘We Build Mountains’ is pure breathless exhilaration from start to finish, crossing over an enormous breadth in a single swoop. The first track is almost an intro, welcoming you into a beautiful melancholy world and then attacking you with power, emotion and rage. It strikes with melody, symphony and starts your journey gradually before the title track sweeps you along into its wake. It has a fantastic chorus that fuels your addiction. Towards the end you get a burst of strange disconcerting melody that Serj Tankian and Daron Malakian would be impressed with. From here, things calm down, ‘A Thousand Fires’ (that’s one hell of an image!) is ridden with variety, one minute the vocals calm and steady, the next they’re stretching their limits and lifting up to the sky, then the heavy duty growls smash through.

And hell, that’s only the half of it. Synth and piano take the stage with ‘Machines’, a morose track at first, leading into power. This, as the longest track, is well paced, full of moving melody and subtle distorted riffs. Emotion comes first on this one, and it’s highly thought-provoking as a result. Next comes ‘SevenThreeOne’, and Serj and Daron are back, only for a few seconds though, because the distorted melody you’ve been loving throughout ‘Machines’ takes the stage again. F*** analysis, it’s just incredible.

The ending is reasonably gentle, and judging the power and strength that emanated through the title track, the album does leave you wishing for more heavy tracks. However where it’s devoid of heaviness it’s packed full of melody, and that’s where the true strength lies. Damn good show. The Sun Explodes are certain to garner many lifelong fans with this.