It’s been a career of stops and starts for the Texan quartet and their fifth album due for release this month is quoted as being an opportunity to finally “create the music they originally wanted to play”. With that in mind, we’re excited to see what The Toadies have brought to the table. 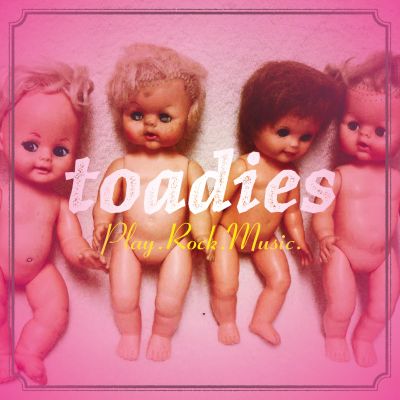 “Debauched, dirty and dangerous” are just three words that we will use to describe The Toadies new album, ‘Play.Rock.Music’. If you like your music creepy-yet-sexy, pumped with attitude and punk hooks then this is the album for you.

Opener ‘Rattle’s Revival’ begins with purpose and will “rattle” your speakers with profound intent set for the rest of the album. First single ‘Summer Of The Strange’ (which was released digitally in May) is a grimy, wicked song which creeps menacingly along; laden with chugging guitars and powerful vocals from lead singer and guitarist Todd Lewis.

‘Beside You’ soars upon reaching its chorus and could be likened to the better tracks of Velvet Revolver (though dare we say it, these guys might just be better). ‘Animal’ roars with primal attitude suited for bikini-clad mud-wrestling and monster truck shenanigans. With the sound of early Queens Of The Stone Age, especially in songs such as ‘Sunshine’ and the latter part of the album recalling the jauntier tendencies of Jane’s Addiction; the hidden treasure is ‘We Burned the City Down’ which will no doubt become a live show favourite. Album closer ‘The Appeal’ is a fitting ending to this rip-roaring collection of songs and offers a different and not unwelcome shade to The Toadies already colourful repertoire throughout ‘Play.Rock.Music’.

Having reformed since their split in 2002, it is clear to see that The Toadies have reclaimed their musical mojo. If you’re looking for “take the soft top down and drive” music, this album is guaranteed to make you put the foot down hard on the pedal.

Cult fans of this band have had to wait a long time for this album and they will not be disappointed.