Oh damn you These Monsters! Damn you straight to hell where the beasts of your name belong.  On being asked to review an album by a band with this name it is a writer’s…this writer’s prerogative to allow a broad grin to creep across his ample face, because it just screams for a simple pun of vampiric proportions. 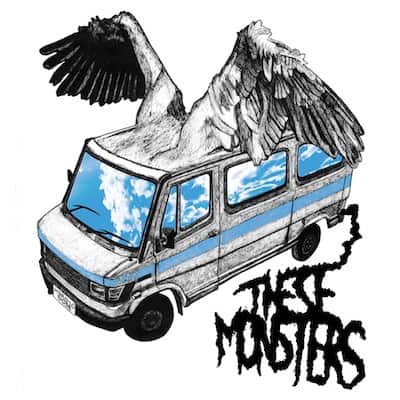 How this writer has longed to be able to make a terrible final line based upon how much this album sucks like Dracula.  Sadly though These Monsters have gone and produced a cracker which means I have to put a bit more thought into this.  As a punishment for the total lack of suckitude however I will just have to include a series of terrible horror references and puns to make up for it.  There’s a prize for anyone who spots them all (although that may be a shameless lie).

On pressing play, anyone familiar with These Monsters’ previous album ‘Call Me Dragon’ may get the impression that they’re about to get a similar doomy, prog record assaulting their earballs.  But then the fun starts.  After 30 seconds of sludgy, ominous intro ‘Very Strong Very Clever’ slams you in the face like Jason’s bat with a punked-up scuzzfest, and from there on These Monsters are relentless as a T-1000.

‘When The Going Gets Weird’ continues the trend that characterises the album, but these aren’t simplistic off-kilter punk chunks.  All of the ideas and skill from the more obviously high-brow previous album are here, but it has all been peeled back like the skin of one of Hannibal Lecter’s victims and what’s left is a series of 10 punchy and frankly deliciously savage and playful little critters.

Now, before anyone goes getting the heebie-jeebies about this album being captive to a stifling sense of sameyness, don’t worry Samuel James Pryor and his brood have still managed to incorporate their vertigo-inducing abundance of ideas into this tighter beast.  While nobody in their right mind would ever have called ‘Call Me Dragon’ flabby, here the fat has well and truly had the Michael Myers treatment and the merciless slicing has made for an incredibly tight and concise series of gut punches.

Concision is the name of the game here but there is still enough variety somehow wedged into this remarkable little work of insidious, good-humoured aggression, that it’s never a surprise when the pace takes a left turn like on the marvelously titled slither of ‘Punk Floyd’.  In fact these boys probably deserve a nomination for the best song titles of the year award, with other particular favourites being ‘One of Those Creeps’, ‘Your Mother’s Lover’, and ‘Survivalists Get All the Girls’.

If you like your punk, inventive and full of ideas then this album could be the summer jam for you.  These Monsters are what happens when you feed a prog rock band after midnight, and they’re coming atcha like Maggie Thatcher.  So give them a listen and scream along.