The world’s most ridiculous news team is back nine years after their foolish frolicking antics in the now much-loved original. Indeed, this was a sequel that many people were eagerly anticipating, and the large following of the first film will certainly not be disappointed as we are treated to yet more bawdy, over the top humour at a consistently quick rate. Indeed, Ferrell, Rudd, Carell and Koechner slip their characters on like an old glove and the sequel unabashedly continues to hit you with such a barrage of sometimes puerile, sometimes completely ridiculous set-ups and jokes that you know what you’re getting is not a refined version of the original, but simply the formula dialled up to new levels in crazy as it goes round in search of laughs. 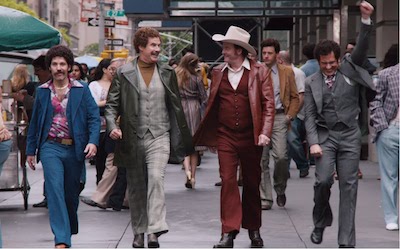 The film follows Ron Burgundy’s downfall as a primetime news anchor with his wife and former nemesis Veronica Corningstone and his subsequent efforts in the rise of 24-hour news with fictional TV network GNN, for which he must reassemble his fabled team. It manages to come up with suitably crazy scenarios for the different members of the team to be in, from serving bats in a fast food restaurant to cat photography, and these are the sort of laughs that fans of the first film will relish, while those who were maybe hoping for more development will be disappointed. Happily though, it feels like the laughs in this film are more refined and more regular than in the first film, and this is in no small part down to the role Steve Carell’s Brick Tamland has to play in events, often saving an unfunny scene with his reliable and yet still remarkable stupidity.

Along with its ridiculousness, and taking in to account its steadfast committed attitude to being tonally and cinematically a spawn of the original, with some of the scenes even being mirrored from the first one, there is also some not-so-sly commentary on the state of modern news as Ron transforms GNN with the simple adage “Don’t give them what they need to hear, but what they want to hear”, to win a bet, using high speed car chases to get ratings. The comedy here is on a slightly higher level to that of bat masquerading as chicken, but that’s all the depth we get.

‘Anchorman’ though is not about depth, and it works on most levels for fans of the franchise. It may be intellectually vapid and might actually have killed a few braincells, but we can all be happy in the knowledge that that’s probably what Ron and co wanted.