The announcement of this sort of biopic about the Royals immediately brings whisperings of Oscar nominations, together with a certain indignation that something like this would garner so much interest. As it turns out, this isn’t as surprisingly good as ‘The King’s Speech’ or as formulaic as ‘The Queen’, it’s just plain boring. Mind-numbingly, head-bangingly, ‘is there really that long left?’ sort of boring. Naomi Watts is a serviceable Diana, not fantastic in that she hasn’t quite absorbed Diana’s mannerisms further than a passable mimic, but you feel like she is let down by a script entirely devoid of anything interesting and simply too timid to have any effect. There’s been a pretty big backlash from the press in general about it, with many calling it disrespectful and trashy, but for me its main offense was simply that it did nothing at all for two hours. 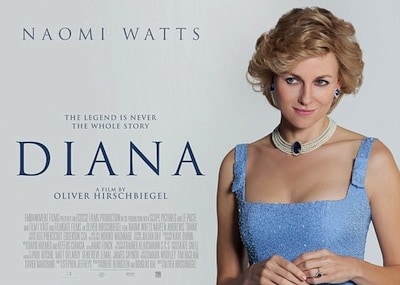 Aiming to be a look at the princess’ attempts at breaking the shackles of the Royal family’s rules and regulations, ‘Diana’ follows her as she makes constant angsty comments about her life, complaining about her lifestyle and, staring off in to the distance and with the air of someone on ‘Home & Away’, that she’ll never have someone to catch her if she falls. It wants the audience to fall in love, to be captivated with the much-loved princess once again, enthrall as it delves in to the somewhat murky confines of her lovelife, and all I can say is give me a break.

Director Oliver Hirschbiegel has made some masterpieces in the past (see ‘Downfall’) but I suppose everyone has to make an utter turkey at some point. Hirschbiegel scraps all the brilliant dramatic tension of that film and his previous film, 2009’s ‘Five Minutes of Heaven’ for abject insipidity with an odd sort of grace, as the film opens with much promise through a series of well-shot and quite dramatic sequences. Where Hirschbiegel loses it however is when he tries to step in to Tom Hooper’s shoes and make a sort of film he’s not familiar with. His portrayal of the princess feels like a badly realised caricature, and Watts can only ever do what is asked of her and which is, quite frankly, ridiculous.

This is not the kind of bad that you can laugh at, it has little on the unintentional hilarity front and only garners an incredulous smile or two at points. It’s not bad in the kind of way it might be fun to watch when drunk, since you’d probably need about seventeen pints to enjoy it, and that’s only because you’re lying prostrate on the floor admiring the pretty patterns that lie therein. ‘Diana’ is the worst kind of bad: it’s so ridiculously tedious that you’d think you were watching a repeat of ‘Cash in the Attic’ while unwell on a Monday morning. Everything is scaled down to inconsequential and while it’s obvious the actors try hard, and Naveen Andrews cannot be faulted on that front, they all feel like badly written soap characters that were written off EastEnders after an underwhelming episode. Honestly, you’re better off buying some cheap paint from your nearest B&Q, painting a surface of your choice, and watching it dry in a dimly lit room with some popcorn and a drink for company, it’ll provide you with a much more fulfilling experience.

To see what times the film is showing click here!