After the disaster that was Roland Emmerich’s 1998 farce Godzilla has been in dire need of a film to shock some life back in to the giant dinosaur. Replacing Emmerich with the up-and-coming Gareth Edwards, known for the low-budget science fiction film ‘Monsters’ that was made for a pittance and did very well box office wise is a step in the right direction and having shown that he could do a lot with not very much, his new task could actually have been his undoing as it removes the shackles of a low-budget production and allows him to let his imagination run loose for the project. What he does manage to make is a film that is much more engaging, intense and exciting than the 1998 version and despite its flaws stands up well on its own two feet. 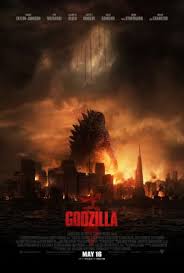 With an all-star cast featuring the likes of Aaron Taylor-Johnson and Bryan Cranston to work with, Edwards attempts to find a middle ground between human drama and action-packed disaster movie, so the story is largely told from Taylor-Johnson’s character’s point of view, a lieutenant in the US Army and bomb disposal expert named Ford Brody whose past bears the marks of our favourite nuclear-power loving creature and whose story makes up our perspective of the destruction that ensues. Interestingly, it’s some other giant creatures, labelled cleverly by the Admiral played by David Strathairn as MUTOs (Massive Unidentified Terrestrial Organisms)  that do a lot of the destruction before Zilly (as he’s known by his friends) joins in for some of the fun, but the build up to his arrival is well managed and the tension and epic nature of the film means you’re rarely bored.

The cases where you may just start feeling its two hour length are when the transition between drama and full-scale disaster movie are at their most jarring, with some of the news reels often used to change focus feeling a little gimmicky and a few scenes feeling like they do nothing but add needless melodrama to the situation, watering down the tense aspects and giving us the slight whiff of the cheese that the film had, up to that point, been stealthily avoiding. Aaron Taylor-Johnson’s understated performance is also at its best when the lines he’s delivering aren’t melodramatic but methodical and thoughtful, because he really doesn’t give the right sort of performance for delivering emotionally impactful dialogue beyond straight-facedly declaring love for his family members. That’s not saying he doesn’t make a good cipher for the film, but it does impact the quality of a few of his scenes, particularly those with Elizabeth Olsen who is underused and largely useless in the wider scope of the film.

Ultimately though, ‘Godzilla’ is a quiet success. It brings back all the wonder of Godzilla without devolving it in to some bafflingly plodding film with no personality like the Broderick version that collapsed so badly. Having put that behind us and with the announcement of two sequels with this film, it will be interesting to see where the franchise is taken to next and whether Edwards, now announced to be taking control of a Star Wars spin-off, will still be around for the ride. Die-hard fans can finally stop having nightmares of Roland Emmerich and Matthew Broderick laughing maniacally while their favourite dinosaur prances around in a tutu, and ultimately that’s all that matters.