Ted is the first live action feature film by Family Guy’s creator Seth McFarlane and is quintessentially a buddy comedy between one man and his bear. The concept being that if a child’s wish upon a shooting star really did come true and his teddy bear came alive, the consequences of that in a real world would involve brief celebrity status, drugs, obsessive fans and an impediment in a relationship which, to its credit, is the most meaningful part of the film. 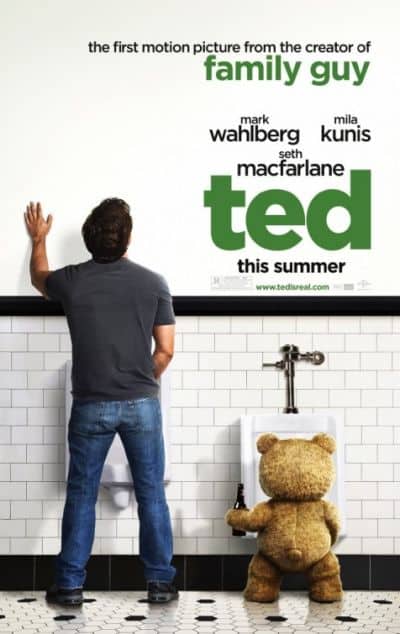 John Bennett, played with capable comic timing by Mark Wahlberg, and his girlfriend Lori, portrayed by the beautiful Mila Kunis, have been together for four years. She accepts and understands, just like the rest of the world, that Ted is real and a part of John’s life but, in a natural need to take the relationship to the next level, she asks that Ted move out. Here the movie descends into a mixture of side splitting comedy moments, one including Sam J Jones who played Flash Gordon in the here often referenced 1980 movie, and dud flat jokes which perhaps simply don’t work on a UK audience.

The movie is definitely for 80’s kids, with its numerous references to old movies (Raiders of the Lost Ark, E.T. etc) and other cultural phenomena like Cabbage Patch Dolls and Teddy Ruxpin and being 80’s kids ourselves we found it genuinely hilarious. Granted this is definitely more for Family Guy/ American Dad (we’ll ignore the God awful Cleveland Show) fans and like these shows manages to meander in a limbo between lowest denominator slap-stick humour and cerebrally quick witted high brow jokes, but it’s still a movie for everyone.


A solid 4 out of 5 for us, as we do appreciate good comedy satire as much as a gritty drama, turn your brain off and enjoy the ride.