Hossein Amini has proved that he’s a talented writer having penned films like ‘Drive’ and Iain Sofley’s ‘The Wings of the Dove’, for which he was nominated for an Oscar all the way back in 1997, and has now decided to try his hand at direction. Having managed to assemble a strong, if small, cast of Viggo Mortensen, Oscar Isaac and Kirsten Dunst and found the perfect vehicle in the form of a Patricia Highsmith novel, the same author who wrote ‘The Talented Mr Ripley’ which Anthony Minghella so expertly transferred to film, he had all the right ingredients to make the transfer to behind the camera a fruitful one. 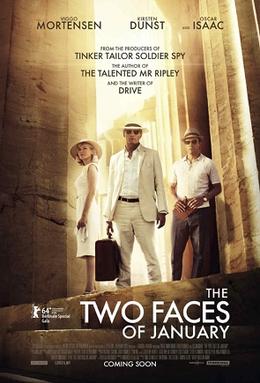 And it is, or at least it is to some extent. Amini brings his usual talent for timely and sparse dialogue to the script, and not a word is wasted as the film keeps you guessing all the way through to the end as to the real motive of all of the characters involved. It’s also wonderful look at, and really captures the period piece feeling that gives the film its atmosphere, each of the characters playing off the environment in different ways. It’s the changing facial expressions and fluctuations in the tones of their voice that give the film most of its human element, and it’s in this aspect that the actors shine, Mortensen in particular as he epitomises the charming, ruggedly handsome rogue.

Beyond this surface level however, it’s tough to reach anything deeper. As pretty as the surroundings are and as interesting it is to watch the character interactions, it all does feel a bit slight and perhaps a little bit too safe playing more like a character drama than a fully fledged thriller for much of its running time even despite the copious smoking that goes on giving it that noirish edge that beyond the extensive puffing is only really maintained by Amini’s careful direction and the sunglasses that the characters are so fond of. It’s never really thrilling, simply interesting and engaging when it manages to examine the darker sides of its characters and the effect they have on each other.

What Amini has managed to do however is prove that he has a lot of promise, and has managed to make something that is not without its fair share of merit and boasts some strong writing and an intriguing script. It’s problems with scratching below the surface means it doesn’t really compare to Minghella’s ‘Ripley’ but it’s definitely a good sign for any future work Amini wants to do behind the camera, and leaves us anticipating even more eagerly his script work on the upcoming John le Carré book adaptation ‘Our Kind of Traitor’.