Having made a name for herself as an actress, Angelina Jolie’s forays in to working behind the camera look set to become more frequent, as she has been dropping hints about the fact that she wants to spend more time directing than acting in future. After the mild success of her debut feature ‘In the Land of Blood and Honey’, she has moved on to examining the life of Louie Zamperini, an Olympic athlete who becomes a bombardier with the onset of the second world war, and whose story has been waiting in the wings to be told on the big screen for a long time now. 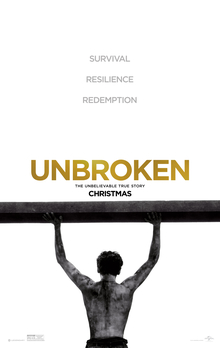 In the main role she casts one of the most promising up and coming actors in the shape of Jack O’Connell, whose performances in the likes of ”71′ and ‘Starred Up’ have shown that he has the acting talent to carry a film, and the range  to become one of Britain’s best in the future. The biggest challenge both for him and another up and comer in the form of Domhnall Gleeson was probably the American accent they have to adopt for their roles. Both do so commendably, with Gleeson’s perhaps the slightly more convincing, but O’Connell is always comfortable with it and his acting ability makes up for any pitfalls. Their performances, along with that of pop star turned actor Miyavi in his chilling role as a Japanese officer in charge of a prisoner of war camp, are the best things about the film.

While the acting level is good and the story can be very affecting ‘Unbroken’, despite all its intense and powerful moments, is definitely a retreading of films that have already walked the same ground and results in emotional releases that feel like they’ve been written down on a checklist. That’s not to say they aren’t effective, and there are certainly moments in the film that are very well done and do resonate with you, but ultimately ‘Unbroken’ doesn’t have enough about it to be any more than a well-acted and somewhat affecting piece that doesn’t do much to go further than the norm for a film like this. It’s a shame because Jolie does a good job behind the camera and it’s definitely well made enough, but it just doesn’t stand out enough to be brilliant.