Film Review: ‘What If’

It will always be the case that Daniel Radcliffe will be first and foremost associated with Harry Potter, but it’s always been important that the famous boy wizard doesn’t overshadow the rest of his career and result in a demise in to obscurity in the style of Hayden Christensen. To stave off this unwanted eventuality he has had roles in ‘The Woman In Black’, a passable if not entirely successful old school horror film, and the biographical drama film ‘Kill Your Darlings’ where he plays Beat poet Allen Ginsberg. To expand that genre diversity further, he stars in this quirky romcom with Zoe Kazan and puts in a performance that is definitely the least bland of his career, putting aside the emotionless faces for a lot of genuine laughs and grimaces that were definitely missing before. It’s good that Radcliffe’s acting is improving, but unfortunately ‘What If’ doesn’t quite manage to become more than an edgy, watchable romcom that gets too enamoured with its own flights of fancy for us to build a true emotional connection. 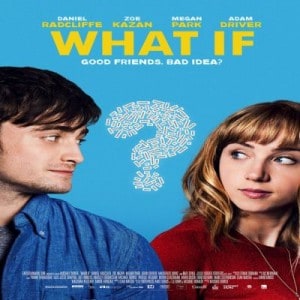 There are some good things about the film though, and they mostly come from the chemistry between Radcliffe’s Wallace and Kazan’s Chantry, whose conversations are always amusing and often a delight to hear, but work despite the rest of the film rather than because of it. The offbeat air thinly disguises common romcom tropes and thus sections of the film become predictable and even start to grate a little, as the level of cheese increases to seemingly unavoidable levels. There are many attempts to salvage it though, Adam Driver tries his best as Allan, Wallace’s womanising, obnoxious straight-talking best friend who definitely has some of the best lines in the film and is consistently funny, but it’s definitely the case that when it succumbs to the formula, all the characters suffer greatly.

‘What If’ is a film that does contain quite a few laughs and a performance by Radcliffe that belies his past, when we’d have to see beyond his wooden performances to enjoy his bespectacled hero back in those heady days. Zoe Kazan’s performance is also wonderfully astute, done with a relaxed charm and as quirky as usual, she matches Radcliffe perfectly and together they make the best parts of the film. Sadly, as solidly directed as it is by Michael Dowse, it definitely starts to wear thin by the end as it becomes a little too dreamy and a little too hard to connect with. A shame, but a mildly entertaining 101 minutes regardless.