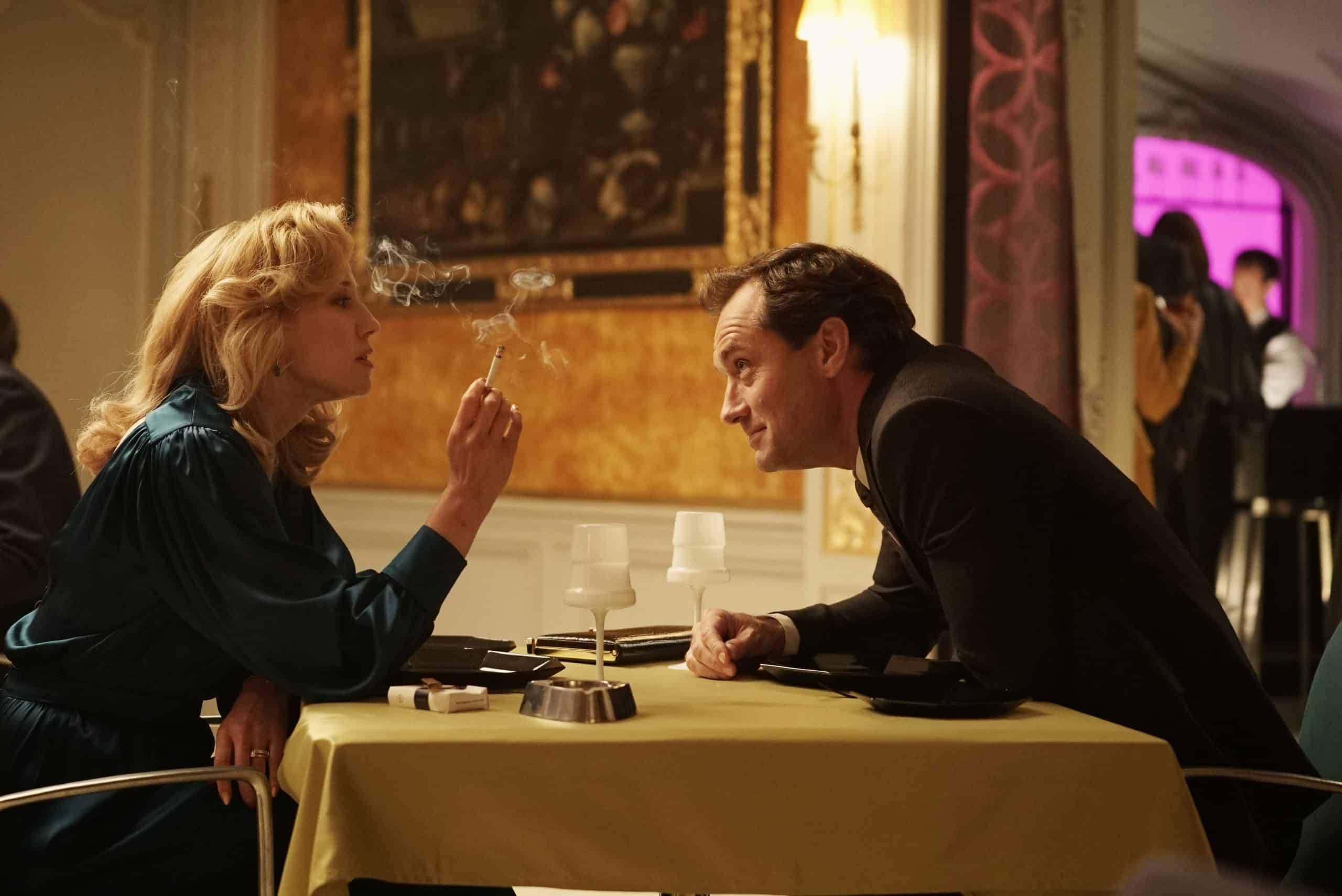 Disclaimer: this review was made possible thanks to a screener provided by the film’s UK distributor, Picturehouse Entertainment. 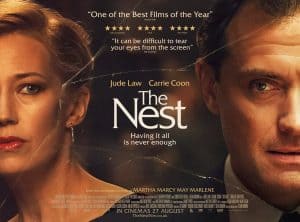 The Nest, writer-director Sean Durkin’s long-awaited follow-up to 2011’s harrowing Martha Marcy May Marlene, fades up on a picture of near-idealised American suburban middle-class bliss.  The O’Haras are the very model of a seemingly perfect nuclear family.  Father Rory (Jude Law), an English expat who crossed the Atlantic chasing that American Dream, is attentive and personable, getting his lovely wife Allison (Carrie Coon) coffee in bed every morning and playing close-fought games of football with his 10-year-old son Benjamin (Charlie Shotwell) and their best friend.  Allison holds down a steady job caring for horses and teaching others how to ride them whilst she saves up in hopes of owning her own horse ranch someday.  Eldest daughter Samantha (Oona Roche), who comes from Allison’s previous marriage, is an archetypal big sister to Benjamin and a budding gymnastics prospect at school.  Pretty much the only thing missing from this initial set-up is a literal white picket fence.

But, as if Richard Reed Parry’s forebodingly minimalist ambient-jazz score not too far removed from the works of Trent Reznor and Atticus Ross couldn’t already intone, all is less than blissful in this picture.  One morning, Rory’s routine wake-up call to Allison brings contentious news: he wants them to move to England.  Rory’s trade work has hit a dead-end in the US, Reagan is about to bring in new quotas on European imports which Rory thinks will open new privatisation opportunities to exploit in the UK, and his and Allison’s shared funds are supposedly about to dry up in ways which can’t support the family’s comfy middle-class existence.  This all said, there are some red flags.  The family has already moved four times prior to now for the sake of Rory’s career, apparently not for the first time on his word that their funds won’t last; his new employer is actually an old employer, Arthur (Michael Culkin), with whom Rory has had a contentious relationship; and much more importantly nobody other than Rory seems all that thrilled about the idea. 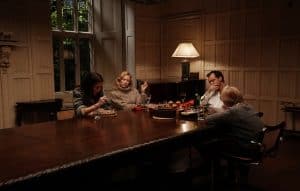 Unsurprisingly, Allison’s reticence turns out to be righter than Rory would ever know.  Cinematographer Mátyás Erdély shoots this prologue with voyeuristic distance indicating that there are unspoken fault lines running in all directions below the family unit, but things become downright oppressively distant and occasionally cavernous in framing when the O’Haras turn up in England.  Rory has put down a year’s rent on an aged, barren, out-of-the-way manor house in Surrey, almost an hour from the city centre office he works in, for he and the family to live in.  It’s an oversized, cold, isolated building Erdély mines for low-lit, echoey, paranoia fuel emphasising the growing distance of those ensnared in such a blatant money-pit even before Rory orders construction on a stable for Allison which shall remain conspicuously unfinished.  Paired with the sound design of dull echoes every footstep on these “perfect condition” Elizabethan floorboards creates, one can very quickly tell that Rory may not be as sharp a trader as he claims to be, having been suckered in with secret rooms and tales of Led Zeppelin recording sessions.

In case you couldn’t tell, The Nest is fixated on the effects of wanton capitalistic greed.  A toxic belief that what one has is never enough and the pursuit of a nebulous ultra-wealthy more is all which matters, regardless of whether it’s really attainable or desired for those subscribing to it.  Not for nothing is Durkin’s film set in 1986, the height of Reaganomics and Thatcherism in a loadsamoney economy driven by entitled formerly working-class wannabe patriarch figures like Rory playing dress up as rich men and relentlessly spouting their salesforce status bullshit until they’ve successfully alienated everyone they come into contact with.  Short-sighted avarice built upon rotting foundations just waiting for the bottom to fall out so the system such people are enthralled to can thanklessly gobble them up before moving on.  A faulty thoroughbred buried underground whose carcass rises back to the surface like a telltale heart. 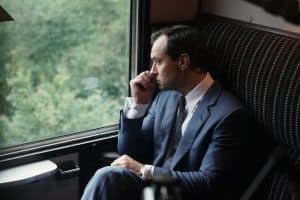 Resultantly, this is a significantly less obtuse and more straightforward affair than Durkin’s acclaimed debut.  Martha Marcy May Marlene operated in abstract associative delivery, intentionally flitting between objectivity and subjectivity in both its camerawork and editing choices to effectively mirror the trauma and destabilising mental state of its semi-titular protagonist, past and present sometimes interchangeable.  It never raised its voice above a whisper whilst doing so and also never really announced itself as such, hence why the film was so uncomfortably haunting, but successfully pulling off those tricks revealed Durkin to be a director capable of remarkable subtlety and an exciting capacity to challenge his viewers.  Martha was just as much a director’s movie as it was an actor’s showcase.

By contrast, The Nest opts to dispassionately watch the O’Haras from a distance as they retreat into individual non-communicative isolation and rot away as a result of Rory’s unresolved baggage and Allison’s bubbling resentment.  Durkin prefers significantly blunter imagery than in Martha – the imposing scale of the manor house, the drab grey halogen-lit interiors of Rory’s office block, an unruly horse kicking and screaming through the night yet getting no reaction due to its owner being too far away to hear.  And he’s also not averse to just outright spelling out his themes in decidedly clunky manners, most egregiously so in a late-film conversation Rory has with a taxi driver after a disastrous business dinner.  Despite that and the overall portent occasionally crossing over into being a little much, Durkin still manages to effectively explore his topics in a manner which remains engaging.  The imagery and its voyeuristic bent is often striking and clearly fussed-over, whilst Parry’s score finds just the right balance of ominousness and aspiration required to aurally communicate the family’s struggle to live up to the lie Rory is constantly chasing after. 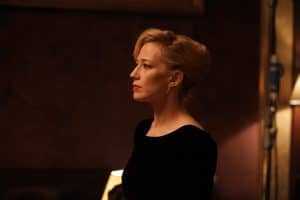 More than anything, however, this is an actors’ showcase, albeit thankfully not in the overblown theatricality sense such a designation usually entails.  Rather, it’s the kind of film where the compelling and convincing performances by its two-hander leads are what make proceedings properly engaging and worth your time.  Of the two, Jude Law naturally gets the showier role; the consummate bullshitter personable enough to initially win somebody over, bullish enough to make his non-stop chancery become sufficiently desperate and exhausting, whilst also having that initial charm mask a simmering rage which icily penetrates whenever things don’t go his way or he gets called out.  Coon, meanwhile, is a timebomb of resentment and scepticism.  You can wordlessly see Allison’s walls go from down to up to crumbling to right the heck back up again thanks to Coon’s body language and subtle facial expressions, particularly when she’s taken to one of Rory’s networking parties and hears the minor revelation that he’d been actively courting a London job for six months rather than being forced into one by circumstance.

When things eventually blow up between the two, from passive-aggression to active sabotage, it’s electrifying to witness and, in spite of its proclivity for didacticism, The Nest ends on a welcome note of ambiguity.  After everything, can a family broken by the selfish drive of one man’s bitter resentment about his lot in life and pathological desire to own recognised status symbols really patch itself back together in a way that could last?  Durkin, like the O’Haras, lacks an answer.  The silence ends up deafening.

The Nest is now playing in cinemas nationwide.