If you’re a twenty-something, you’ve definitely gone through a Brand New phase at some point in your life. Whether going through the post break-up blues and playing ‘Your Favorite Weapon’ on repeat, or throwing your two cents into the Brand New V Taking Back Sunday feud, we’ve all been there. The band’s ever-changing sound and continuous popularity contribute to their sold out show from this Monday night at the O2 Academy in Leeds. 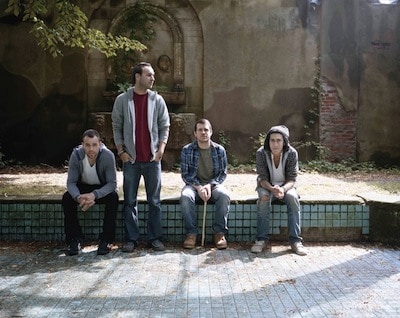 Upon arrival, groups of pop-punk and emo fans of all ages line the venue, anxiously awaiting the show, which features support from fellow American bands, The Front Bottoms and Saves The Day. The Front Bottoms start the night off in style with frontman, Brian Sella’s eccentric demeanour bringing the perfect amount of energy to the table for any opening band. With everything from synth to trumpet, The Front Bottoms have the attention of the packed venue from start to finish and keep everyone moving.

Next up are pop-punk icons, Saves The Day. Following our interview with the band before the show, they deliver an enthusiastic and energetic performance that keeps fans captivated. Celebrating the UK release of their self-titled album, the band mixes up the set with old and new favourites, ranging from ‘At Your Funeral’ to ‘In The In Between’, with members of the audience crowd surfing and screaming the words right back to frontman, Chris Conley. Conley, along with guitarist Arun Bali, bassist Rodrigo Palma and the band’s latest member, drummer Dennis Wilson, provide a great atmosphere to get the full house ready for Brand New.

As the lights go down, shadows are seen taking the stage with nothing but cheers from the crowd and the sound of feedback for nearly a minute. After disorienting the crowd with a dramatic build up, the set kicks off with the fast paced and anthemic, ‘The Shower Scene’, which gets the crowd moving from the second Brian Lane’s sticks hit the drums. The show continues with classics from the band, such as ‘Sic Transit Gloria… Glory Fades’, highlighting bassist Garrett Tierney’s skills with a steady bass line. The tone of the show slows down with ‘The Boy Who Blocked His Own Shot’ and ‘Millstone’. The nostalgic lyrics of songs that have been used to mend many broken hearts for nearly fifteen years continue to pour through the dimly lit venue filled with dedicated and admiring fans singing along to every note out of frontman and vocalist, Jesse Lacey’s mouth. Though the pace of the show begins to dwindle nearly an hour into the set, the crowd doesn’t seem to mind. However, the tone of the show is brought right back with classics such as ‘Okay I believe You, but My Tommy Gun Don’t’ and ‘Seventy Times 7’, with the help of lead guitarist, Vincent Accardi.

Throughout the band’s approximate ninety minute set, the increasingly apparent sound of feedback begins to fill the venue, causing members of the audience to draw their attention away from the stage. Unfortunately, the performance starts strong, but peaks early on in the night with very little interaction from the band as the show progresses. While the sound isn’t fantastic and the performance is less than exciting to watch, the impressive setlist with a great combination of fast and slow, old and new, seems to keep fans more than happy to the end with ‘Degausser’ followed by ‘You Won’t Know’, bringing the show to a close. With very little talking to the audience and each other and even less movement on stage, apart from playing their instruments, Brand New play for nearly an hour and half straight, with the exception of Jesse Lacey playing a distorted note from his guitar for about a minute while the other members of the band temporarily leave the stage. Though the show doesn’t technically end with an encore, ninety minutes of playing is more than enough to keep fans satisfied, albeit slightly bored.