Martyn Fillingham from …And The Hangnails reviewed Cloud Nothings for us recently – it’s a fun read! 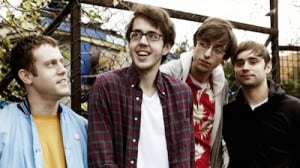 Tonight, here and nowhere else is on of my favourite albums of 2014. Attack on memory was one of my favourite albums of 2012. I am a fan. They were mint. By my questionable memory, they played every track off of ‘Here And Nowhere Else’, and most of ‘Attack On Memory’. Although I was a little disappointed that they didn’t play ‘No Future/No Past’, they played a killer set. Cloud Nothings are a live band. Even on record you can hear the natural speed changes that are pretty integral to their energy.

Live, it’s on another level. Jayson Gerycz (drummer) is one of the most unreliable, erratic keepers-of-time and subsequently one of the best drummers I’ve ever seen live – combined with Dylan Baldi’s song writing, it makes for an explosive, emotive combination. Gerycz’s unwillingness to stick to one single BPM gives a visceral sense of urgency and real excitement. Cloud Nothings combine a the classic three-minute lo-fi punk pop songwriting with extended. ambient instrumental builds to great effect.

Having been in bands since I was 13 and having worked in music venues and reviewing bands in one way or another for the last five years, I can be quite cynical. But the Cloud Nothings are fucking ace and well worth checking out. They can be a slow burner, but well worth the wait. For fans of Japandroids and Yuck, or even the Stiff Little Fingers. Maybe think where Green Day could have gone after ‘…Smoothed Out Slappy Hours’, but didn’t.