Fulford Arms in York is becoming ‘the’ place to get your noise kicks in the city, with the Duchess now gone this venue has had to step up its game and did so on a Thursday night by booking one of the hottest riot-grrrl outfits this side of Hole – Hands Off Gretel. 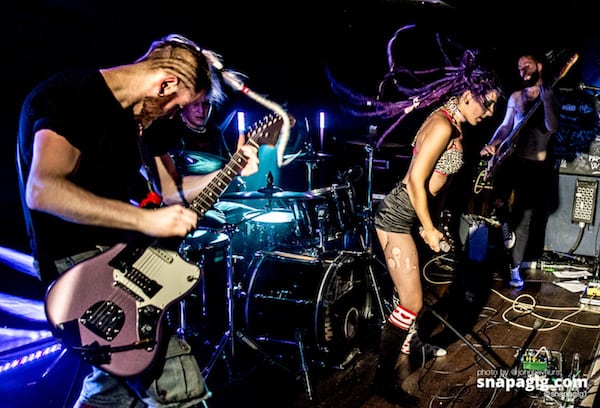 First though we have a couple of support bands to watch and Humble Scoundrel delight the early attendees with some sure fired rock, think Weezer cranked up to 11 with strong riffage coming from guitarist Allenby who wasted no time in losing the beanie hat and throwing his hair around. So great to see a young band with confidence but also the tunes to match, Tommings on bass and main vocals is a slightly quirky beast, all geeky specs and attitude, says whatever he wants, whenever he likes. It works, and in-between song banter during tuning keeps the smiles on faces. “Put Your Finger On It” has such a strong opening bass and electric riff reminding me of Soundgarden’s ‘Spoonman’ – I urge you to check out their new home made video released this September for that song. This three-piece from Leeds are powerful and definitely worth checking out. 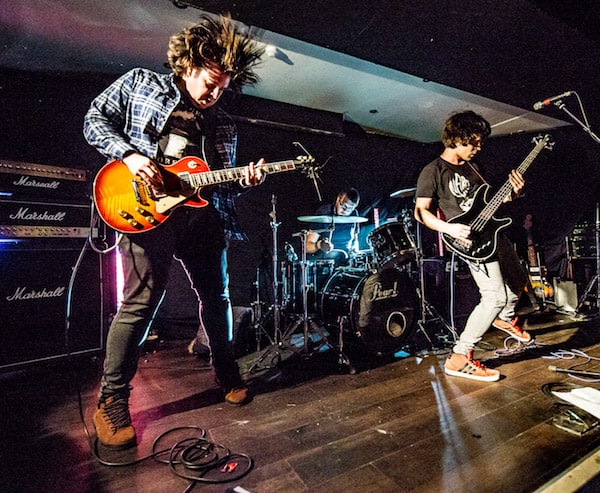 Seep Away are next and with Dom Smith on drums they pack a punch in the guts and get deeper into the crowd than most would expect – two of the microphones are placed off stage and it’s hard to tell where the band starts and the audience finishes. Vocalist Jay Sillence engaging with anyone that makes eye contact and its very hands on – be prepared to have your face melted by a scream of some force before he turns to the rest of the band and pulls out a triangle jokingly hitting it every so often. You can’t hear it for the thrashing of birthday boy Max Watt’s guitar. It’s a grunting, screaming, thrash-metalcore sound which you either love or hate, and the marmite continues to be added when they break out a cover of “Loving You” – a twee love song made famous by Minnie Ripperton, but their version is the darkest you’ll hear with gothic overtones and instead of a high pitched squeal after the “la la las”, you get the Sillence scream. Have to say, they put every effort into the performance and will be worth catching again sometime. 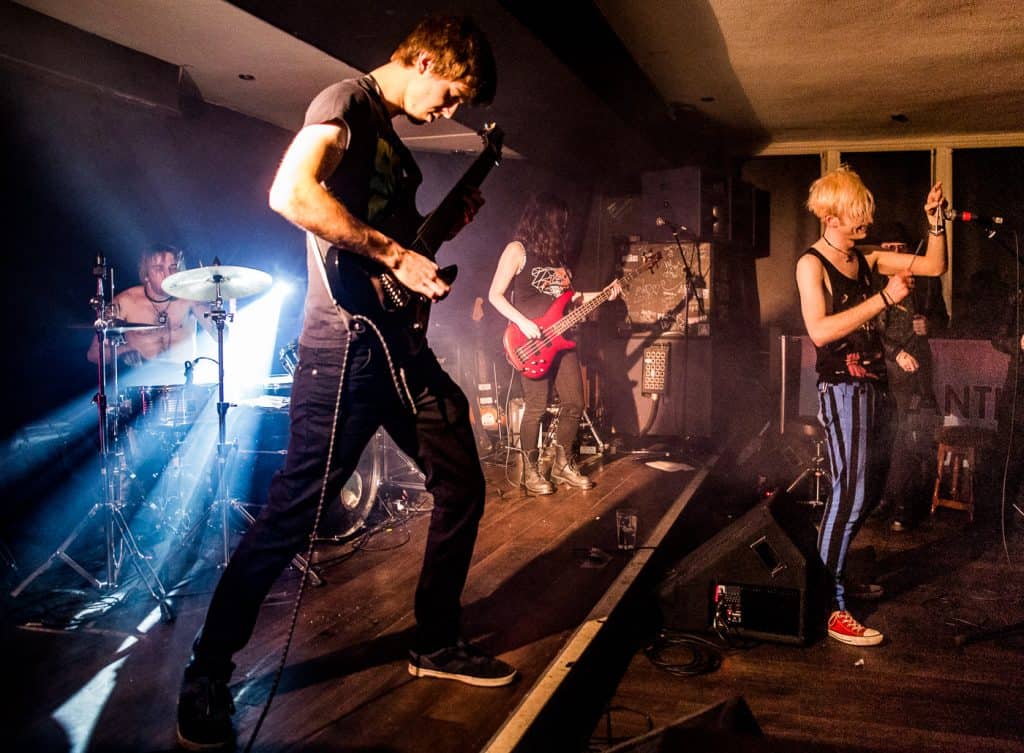 So, a packed crowd are here to see Hands Off Gretel and with some in the crowd sporting HOG t-shirts it is clear the Barnsley band have brought a few fans with them. Lauren Tate is the main focus, with ripped tights, black shorts and leopard patterned top, complimented with a pink choker, tiara in some heavy purple dreadlocks and the word “Burn” written on her chest, this girl makes a statement when she takes the stage and it continues throughout the set.

Sean provides the guitar wizardry and Joe is a bassman of some skill and a comic persona to match. Drummer Sam is still recovering from a broken finger but that doesn’t stop him giving the skins a good beating tonight. The group is now a very tight 4 piece, to the point where Lauren is able to break away from rhythm guitar duties and can explore the stage more. High kicking, taking mobile phones off people and crawling around on the stage is now part of the performance, but the trademark scream from her is razor sharp and still used to full effect.

Just about all of the “Burn the Beauty Queen” album is played with standout tracks “Queen of the Universe”, “My Size” and “Bad Egg”. Beer keeps getting spilt over the stage and at one point Lauren is barefoot within 2cms of a power cable – you fear the worst but thankfully they get through unscarred apart from an amp failure which means Sean has to double up on guitar duties and Lauren can express herself more on the beer stained floorboards. It almost becomes artistic dance when her leg gets wrapped around a mic stand.

The audience desperate for more are rewarded with a couple of encores and “One Eyed Girl” is also added at the end for good measure. This is a competent display by such a young group with a great DIY ethic and energy. Thursdays at the Fulford Arms in York have never been so good! 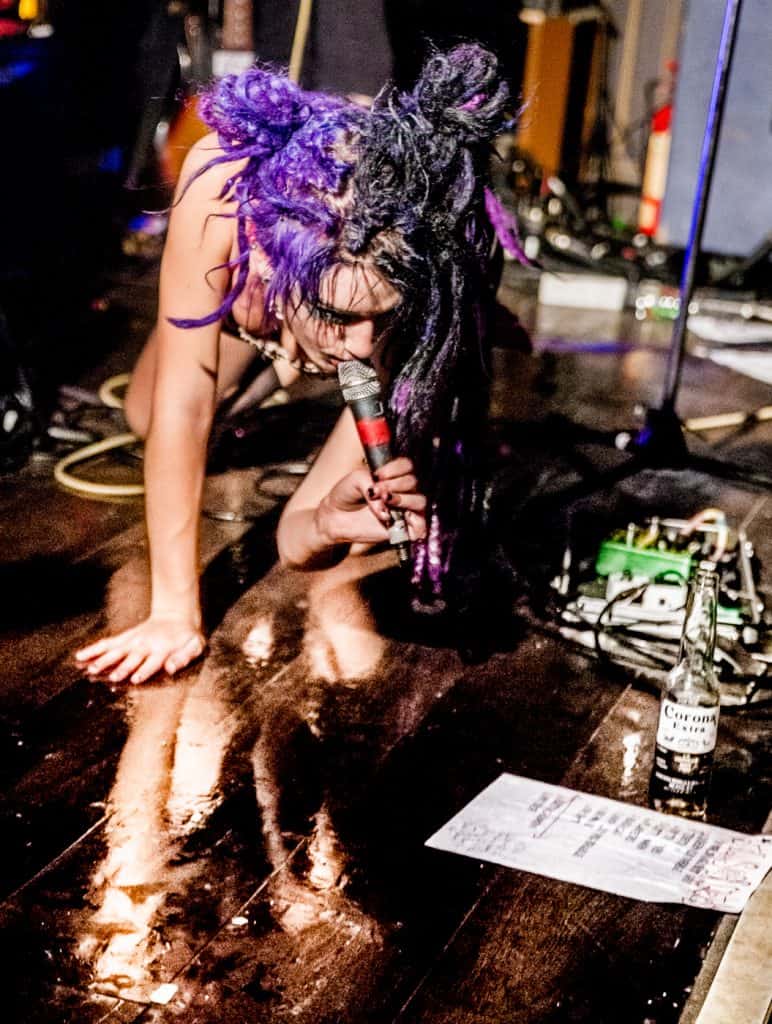