This writer remembers seeing Less Than Jake sometime in late 2006 in Hollywood on the city’s famous Sunset Strip. It wasn’t as glitzy as it sounds. Only a couple of hundred or so ska kids propped up the House Of Blues bar as a wounded band told of a string of cancellations on its US tour, including one in Utah where they’d only sold 13 tickets. What the ‘eff, man? 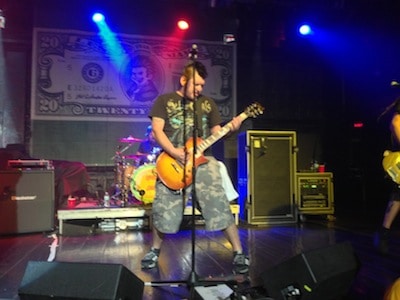 This was truly baffling to me as, earlier that year, they’d kicked an ungodly amount of ass on a sold-out UK headlining tour. Was the ska-punk era forgotten in the US? Or were American kids too busy swishing their straightened fringes at emo shows? Maybe a bit of both.

Anyway, even many years later, with the band’s heyday even further from sight, it’s reassuring to know that when the fun-loving, horn-aided quintet from up the road in ‘Gainsville Rock City’ comes home to Florida; Florida fu**ing shows up.

Co-headlining at the intimate Revolution venue with Sublime tribute act Badfish, LTJ kicks off its set with the lesser-known ‘Does The Lion City Still Roar’, before easing into the mellow-yet-bouncy ‘Ghosts Of You And Me’, and then seriously picking up the pace with ‘Hello Rockview’s ‘Scott Farcas Takes It On The Chin’ – which had the audience joyously bada-bubu-baba-ing through the horn sections, assisted on stage tonight by Mighty Mighty Bosstones Trombonist Chris Rhodes.

The tight set rolls on with the outstanding sing-a-long track from 2002’s underrated (yet relatively horn-less) ‘Anthem’ LP, ‘Look What Happened’ (you know it…“And I swear it’s the last time and I swear it’s my last try…”) before giving the collective larynx of its home state crowd a well-earned break with a newer track ‘The New Auld Lang Syne’ and the rarely-played, ‘Motown Never Sounded So Good’, also from ‘Anthem’. 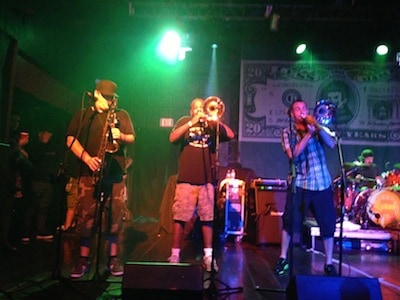 The band channelled their frenetic mid-90s glory days mid-set with raw-yet-tight renditions of ‘Dopeman’, ‘Sugar In Your Gas Tank’ and ‘Automatic’ from the breakthrough album ‘Losing Streak’, concocted beautifully with three of the band’s best known tracks; ‘History Of A Boring Town’, ‘All My Best Friends Are Metalheads’ and ‘Last One Out of Liberty City’, highlighted by Roger Manganelli crunching through baselines as he alternates vocal parts with frontman/guitarist Chris DeMakes, who has obviously run out of fu**s to give at this stage of his career and is enjoying every second of it.

To serve up an example of that vibe, a giant shirtless fellow who could very well have been a body double for WWE wrestling behemoth Prince Albert (or Lord Tensai if you’re a n00b) was then summoned on stage to bench-press a skinny Justin Bieber lookalike. Don’t see that every day.

LTJ moves onto a newer track ‘Goodbye, Mr Personality’, which we were assured is good because it was written when the group was writing its good shit in 1998 and was kept in storage for a rainy day. It’s a really great throwback song.“Everyone knows a band’s old sh** is their best shit and any band who doesn’t play their old sh** is a bunch of dicks,”proclaims DeMakes. I guess he was only half joking.

Late on in the show, as the band blasted out ‘Help Save The Youth The Youth of America From Exploding’ and the crowd-pleasing ‘Johnny Quest Thinks We’re Sellouts’, the audience are treated to an on-stage marriage proposal (She said yes, thankfully!), before that portion of the evening is rounded off with the multi-layered and fast-paced ‘Plastic Cup Politics’ giving the band’s sweat-soaked and eclectically-aged fanbase one last chance to skank their sweaty asses around the venue’s lowered circular pit.

Despite being inexplicably billed second to a covers band (albeit a very well supported covers band) on this show, it warms the cockles to say that Less Than Jake are alive and well in their homeland. No wonder they come back to the Sunshine State so often. See you in a few months, guys!