Now in its seventh year and providing a lineup that’s as strong as ever, Live At Leeds has proven itself to be a pretty damn good way for music-lovers to get their fill over the May bank holiday weekend – for our part, we make our way to Leeds for the main event on Saturday, May 4. While a slightly delayed arrival (blame the fact that this writer works nights…) means that we missed early standouts such as Lone Wolf and Battle Lines, there was nevertheless more than enough to keep us sated throughout the day. 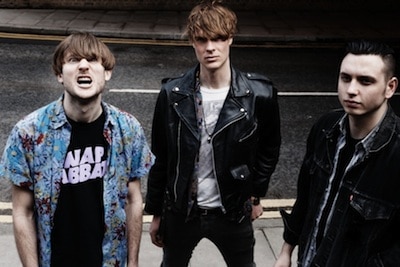 We eventually get started with an unexpected encounter with balls-out (not literally) rock ‘n’ roll three-piece Those Rotten Thieves, as we catch the tail end of their set in Leeds Uni Mine – and our reward is to be treated to a song called ‘Leather Lover’. “It’s about making love in leather,” clarifies frontman Ricker, just in case you were under the illusion that it might be about a person with a fondness for soft furnishings. Joking aside, the band provide a slice of good, dumb fun to kick-start the day and wake us up a bit.

We’ve actually come to see something far more cerebral in the form of Swimming Lessons (aka Ben Lewis), who kicks things off in Leeds Uni Stylus. His set of ambient electronic dreamscapes is seamlessly woven together – it’s the sort of soothing, blissful music that makes the fact we haven’t had much sleep a lot easier to bear. After that, we kill some more time over in Mine watching pop-punkers Blackeye play a quick set. There’s potential for sure, but a little more of a grungy kick wouldn’t go amiss – as it stands, their sound is a little too bubblegum-sweet for our liking.

Leeds University proves to be a strong choice for any early attendants who were willing to make the trek, as Department M are next up in Stylus. Owen Brinley’s new project is fast becoming a favourite among the Soundsphere team, and for good reason – but those expecting more guitar-based sounds from the ex-Grammatics man might be in for a shock, as there’s not a six-string in sight (Nana’s keyboard still makes an appearance though, Grammatics fans). Owen’s sweeping falsetto is now complimented by brooding, post-industrial electronica – debut single ‘I’ll Fax You An Apology’ hums with malice, while set-closer ‘J-Hop’ matches its mantra-like vocal hook with hip-hop drumming and sinister keyboards. It’s definitely the darkest that Brinley has ever been, and it suits him well.

It wouldn’t be right for us to attend a festival this close to home without supporting some York-based talent, and fortunately we’re able to catch one of our favourite local acts Fawn Spots playing in Mine. Crashing into action with ‘Watered Down’, they put in one of their most frenetic sets to date, almost seeming to play even faster than normal in order to cram as many songs as possible into their half-hour slot. There are new songs that almost take more of a straight-up punk direction, as well as a handful of older tunes that still put a smile on our faces – the chorus riff on ‘Age Old’ in particular remains one of the most satisfying in their arsenal, while ‘Grey Arcade’ gets a fantastically ramshackle treatment. Simply put, if you haven’t been paying attention to this band, then you really should start doing so – they’re one of the best noise-pop acts in the country right now.

More Soundsphere favourites are to follow in the form of Dinosaur Pile-Up (pictured), who have the unenviable task of playing the University’s vast Refectory in the middle of the day – the home-town advantage is on their side though, and they draw a sizeable crowd. But while the songs both old (‘My Rock ‘n’ Roll’, ‘Traynor’) and new (‘Arizona Waiting’, ‘Derail’) are brilliant, they’re marred by some heavy-handed engineering. Now don’t get us wrong, we like it loud here at Soundsphere – but there are limits, and throughout the set the drums were at an ear-splittingly high volume. It’s a bit like viewing the Mona Lisa through a muddy pane of glass – you know it’s still a beautiful thing, but the experience just isn’t as enjoyable. Still, sound issues aside, all signs look good for release of the band’s new record in June.

The day’s biggest surprise comes in the form of London Grammar – it’s a surprise that we’re able to get in the venue in the first place, given how hotly-tipped they are, but a tip-off from a friend has us chancing our arm and getting to Leeds Met Uni just in time. The bigger surprise, however, is how enjoyable they are – it’s easy to look at a hyped band and immediately be sceptical, but we find ourselves beguiled by their spacious, expansive sound. The band call to mind Zola Jesus fronting The xx, with Hannah Reid’s voice finding a perfect balance between power and restraint as her bandmates conjure up swooning soundscapes around her. For once, we’re convinced to believe the hype.

After that, it’s once again time to switch gears and head back up the road to Stylus, where Danish electro-pop up-and-comer MØ is strutting her stuff. The most obvious comparison is Robyn (MØ even has her own song about longing to dance with a specific partner), though in my mind there’s also a little of The Knife’s Karin Dreijer Andersson present as well. Perhaps this is what a Fever Ray record might sound like if Karin let her hair down – or in this case, put it up into an impressively long ponytail. It’s a striking, confident and captivating performance, encapsulated by her lead single ‘Pilgrim’ – the kind of forward thinking electro-pop/R&B hybrid that ought to be taking dancefloors by storm.

Happily, we’re now in prime position to watch one of the day’s absolute must-see bands, London post-punk quartet Savages, who’ve perhaps come as close as any band in recent years to capturing the spirit of early Joy Division. It’s a testament to the band’s tenacity that they manage to completely destroy Stylus despite being plagued by technical issues. Singer Jehnny Beth’s microphone barely works for the first two songs, leaving ‘City’s Full’ bereft of its angry, dynamic vocals and ‘I Am Here’ missing its wailing crescendo (ironically, the band immediately launch into ‘Shut Up’ after the issue is fixed). Later in the set, Gemma Thompson suffers a guitar failure that sees the remaining members holding down ‘Give Me A Gun’ as a three-piece – it’s testament to how bloody good Ayşe Hassan (bass) and Fay Milton (drums) are that it still somehow works. But these frustrations only serve to highlight what a tightly functioning unit Savages are – and Jehn’s seething anger is put to good use on the venomous ‘Fu**ers’. In the hands of most other bands, a sentiment like “don’t let the fu**ers get you down” might come across as trite, but Jehn’s delivery soon banishes any such thoughts from our minds. The band’s final three songs cap their set off in a triumphant fashion – beginning with ‘She Will’, which starts as a majestic slice of post-punk and ends in a wide-eyed, maniac whirlwind. Then there’s the brutal ‘Hit Me’, in which Jehn matches her bandmates’ sheer sonic viciousness by managing to make the words “hit me, won’t you hit me!” sound like a threat – and finally, there’s ‘Husbands’, whose driving pace and explosive riffs see the crowd respond by forming a mosh pit at the front. This one-two-three punch proves that Savages not only utterly brilliant, but also aptly named – they’re the kind of band who’ll thrill and terrify you in the best way possible.

After a brisk walk, we arrive at Holy Trinity Church in good time for Icelandic songstress Sóley, who couldn’t be more different to what we’ve just witnessed at the University. Her songs are delicate, ethereal things of beauty, her voice as sweet as her on-stage demeanour is utterly endearing – but while her delivery is spot on, the atmosphere in the church is anything but reverent. Not only is there a constant hum of chatter (and even some shouting at one point), someone also decides that it would be a great idea to start emptying the bar’s bottle bins during her set – and to compound the issue, all the noise is amplified by the echoey acoustics of the building. Perhaps Sóley’s music is a little too outré for a festival crowd at 9pm on a Saturday evening – particularly the sinister ‘Kill The Clown’ and the dream-like ‘The Sun Is Going Down’ – but it’d be nice if those who simply aren’t interested would just leave the building and let everyone else enjoy it. As it stands, hauntingly fragile songs like ‘Pretty Face’ almost get lost amongst the noise – it’s a shame, as spellbinding set-closer ‘I’ll Drown’ is perhaps the most wonderful thing anyone who strained to listen over the hubbub will have heard all weekend. In an ideal world it should have been enough to bring the room to a standstill – but despite the less than perfect conditions, Sóley is polite to a fault, and I can only hope she’ll one day be able to return to a more attentive audience.

There’s one last band that we want to catch before we leave, but they’re going to make us wait – a perhaps questionable piece of planning means that Melody’s Echo Chamber take about an hour to soundcheck, with roughly half of the time spent simply trying to cram their not-inconsiderable amount of equipment onto Nation Of Shopkeepers’ tiny stage. Eventually they’re ready, with Melody Prochet thanking us for our patience – and then all the crowd’s resentment and tension is washed away within seconds as the band launch into the heart-meltingly brilliant ‘I Follow You’ and the atmosphere immediately becomes feel-good. From that point on, the band don’t put a foot wrong – Melody is in possession of a gorgeous voice as well as being utterly charming to boot, and her band whip up sun-kissed psychedelic jams via fuzzy guitars, laid back rhythms and warm synths. The extended psych workout at the end of ‘Crystallised’ is a particular highlight, as is the sprawling, dreamy ‘Endless Shore’, but the whole set is a joy from start to end. If I could have captured the moment where Melody makes a little heart shape with her hands as a gesture of thanks, I’d frame it and put it on my wall – it sums up the mutual love present between the band and the audience perfectly.

Overall, Live At Leeds has delivered the goods once again, providing one of the most consistently brilliant days of live music we’ve had the pleasure of experiencing so far this year – and that’s to say nothing of all the great bands we no doubt missed! Here’s to another successful year in 2014 – we’ve every faith that next year’s lineup will be able to match the quality we’ve seen today.