As the lights in Brixton Academy go down, its that moment many have been waiting for since they heard the tour was announced and for some it will be their first Gaslight Anthem show. Whether you’re a new fan from their new album ‘Handwritten’, or a veteran of the band’s ever-growing fanbase, everybody knows them Jersey boys are coming. In the dark, the crowd applaud and scream and as one of them Gaslight Anthem fan from the early days this is overwhelming to see. 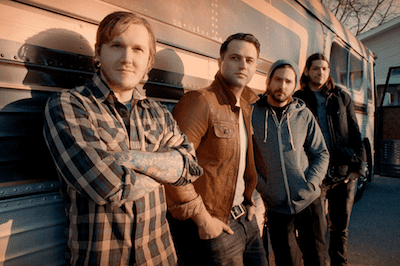 This writer has been to many Gaslight shows around the UK, but this is the first London show (normally based in Hull) and first visit to the beautiful Brixton Academy.

Opening this show with ‘Mae’ – the second slowest track from the debut album, we wonder whether the pace and tone of this is really going to work, but it definitely does. “Stay the same, don’t ever change” is the first line that lead singer Brian Fallon sings out to the crowd and they sing it back in full force. It’s easy to assume that the fans are passionate about that line and genuinely mean it when they sing it, and we don’t blame them.

Brian is quick to remind everybody here that this is their second Brixton date on the tour, the previous one being just days before but you wouldn’t be able to tell if he didn’t make you aware, the band seem just as stoked to have the honour of playing to the packed out venue. It’s great to see the other half of Fallon’s side-project The Horrible Crowes’ guitarist Ian Perkins as a new addition to the band. It’s clear to see he definitely gives the band a fuller sound they didn’t quite have on previous tours.

The setlist is a strong one and takes a refreshing, even amount of tracks from all four albums and even the four track EP ‘Senor And The Queen’ gets a look in, with the title track played mid-set. However fan sing-along favourite ‘Blue Jeans & White’ t-shirts was sadly nowhere to be seen, it was easily forgiven after a beautiful performance of ‘She Loves You’ in the encore to which Brian congratulates the crowd for being “the best at singing along he’s ever heard” [awww -ed] and he’s not wrong, the room can be heard singing along like a choir to every word. A truly excellent show.