Home » A new religion: In Conversation with Pale Waves

Pale Waves have grown up, and their fans have grown up with them. From their humble beginnings in student halls, to becoming arena-filling Dirty Hit signees who wear their hearts on their sleeves as readily as their black lipstick, their rise has been meteoric. Their 2018 debut record My Mind Makes Noises looked through a lens of nostalgia into a world of candied synths which fizzed with firsts, from love to loss. But now, as we catch-up with singer and lyricist Heather Baron-Gracie, it’s clear that with the dawn of a new era and the upcoming release of their second album, Who Am I?, the world has opened up to Pale Waves, and they have opened with it. Swapping the inky blacks to washes of pink and blue, Baron-Gracie talks us through a new horizon coloured by entirely different influences, as the band stylistically and lyrically – not to mention emotionally – find a new religion. 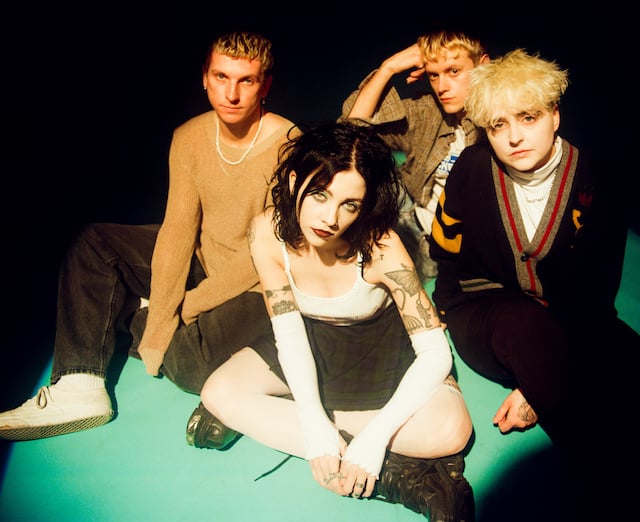 “I didn’t want to write the same record again,” Baron-Gracie insists. “I knew that we had to evolve and develop.” The band have made a decisive pivot away from the billowing soap bubbles of pop from their debut album defined, which proved to be a poisoned chalice for the band; yes, it was the sound which brought them worldwide recognition, but they found themselves in the critical firing line for having only one trick up their sleeves. “The 80s era has never been particularly my favourite,” she says. “I do like 80s music, but it’s never been a genre that I’ve felt very passionate about. It was nice to write a record that was more alternative, stripped-back and vulnerable.”

The fingerprints of Courtney Love and Alanis Morrissette can be found all over Who Am I? The record is a simulacrum of the raw rock balladry of the 90s, yet still finished with a Pale Waves gloss. “I’ve been listening to a lot of powerful women,” Baron-Gracie shares. “They’re very unapologetic, and don’t shy away from anything – I was really influenced by that. I wanted to embrace not shying away from things and thinking about how other people would judge me.”

Lyrically, she departs from the lovelorn, universal scrawls of a teenage diary, and weaves much more of herself into her themes. “She’s My Religion” is a grunge-infused ode to her girlfriend Kelsi Luck, an unflinching and dizzying anthem of queer love. The record is her pursuit of asking the titular question, Who Am I? She boldly enters territories that up until recent years, have been entirely off the table in the realms of pop music. “I embrace my own sexuality a lot,” she elaborates. “I embrace what it’s like to be a woman. I speak about mental health. I talk about body image. I criticise society, and how it tends to try and box us in, making us the same person. I wanted to come back with a second record which had a message that was ultimately strong – a message that society needs to hear.”

The record defines a particular time in Baron-Gracie’s life, where her perspective began to shift during the comedown of the hype of My Mind Makes Noises. Delving into the poetry of Iain S. Thomas, whose work details the experience of love, falling apart, and the intricacies of the mind, she was at last afforded the time to think. “It was sort of the start of me wanting to change and become a better person,” she explains. “I feel like I’ve really neglected that for a long time. I neglected myself, and I didn’t embrace a lot of parts of me – I didn’t really get the time to. We were on tour for pretty much three years solid, so I didn’t get time to step away from it all and just be able to work on myself and do normal things. It’s very much influenced by me growing as a person.”

The touring environment left Pale Waves creatively depleted. They tried to pen a second record while shuttling from venue to venue on a bus, but nothing was coming to fruition. “Me and Ciara [Doran, drummer, songwriter] exhausted one another on the creative side of things, and we realised we both needed to step away from that environment as well as each other – just to have time apart and to create, you know, as individuals.”

Being able to go it alone was what made the group stronger than ever. Ciara Doran and guitarist Hugo Silvani were able to indulge in their passion for production, having the chance to hone in on their skills that went largely untapped in the band. Charlie Wood, their bassist, also entered into the world of DJing. “We’ve grown up and found love in things beyond Pale Waves, which I think is really healthy. I feel like we’ve all really grown as peoples since My Mind Makes Noises in comparison to where we were when we were writing Who Am I? In the first record, we let the pressure get to us a bit to much – but now, I think we realise what’s truly important.”

One of the most enticing features of Pale Waves is their aesthetic. While their imagery hasn’t changed drastically, still striking and steeped in alt tradition, Baron-Gracie feels that her vision has only gained in strength over time. “We’ve always been quite bold,” she says, “and we’ve always been considerate to the imagery of everything. I love aesthetics – I love getting dressed up, making music videos and playing characters. The visual side is just as important as the musical side, to me. I feel like they coexist nicely together in Pale Waves.”

As much as the band have musically moved past the My Mind Makes Noises era, Baron-Gracie insists that she still stands behind it. “It’s very nostalgic to me,” she says. “It does hold a great place in my life – it’s amazing, because it’s really sort of influenced a lot of people’s lives. I’m really thankful that we were able to do that. It was a record that right then, in that moment in time, was perfect for me. But I feel like I’ve really grown up a lot and changed a lot of my priorities. I don’t require fame or laods of money – I just want to have a fulfilling life. I want to find happiness. I’m removing a lot of materialism and toxicity out of my life. I was so young back then, and that album has a naivety to it, which people find comfort in.” As a new era begins, she looks back on her younger self with fondness: “23-year-old Heather feels like an entirely different person – I just want to give her a hug and say it will get better.”

But now, as we catch-up with singer and lyricist Heather Baron-Gracie, it’s clear that with the dawn of a new era and the upcoming release of their second album, Who Am I?, the world has opened up to Pale Waves, and they have opened with it. Swapping the inky blacks to washes of pink and blue, Baron-Gracie talks us through a new horizon coloured by entirely different influences, as the band stylistically and lyrically – not to mention emotionally – find a new religion.