Home » PEAKS! on an exciting future, creative influences and more

PEAKS! saw the future before they even began. The Italian alt-rock duo’s debut single “Blackout”, with its woozy guitar riffs and punishing drops is a song about drunken disorientation, struggling to get to grips with a reality you don’t feel at home in. “The crazy thing is,” Luca says, “’Blackout’ is the perfect picture of the moment we’re in now.” As we are still adjusting to our own reality tipped on its axis from a global pandemic, the track has an almost eerie resonance. For PEAKS!, however, rather than being seen as an omen of times to come, they want “Blackout” to be loved based on the merit of why music is most important to them: comfort, and to feel a little less alone. 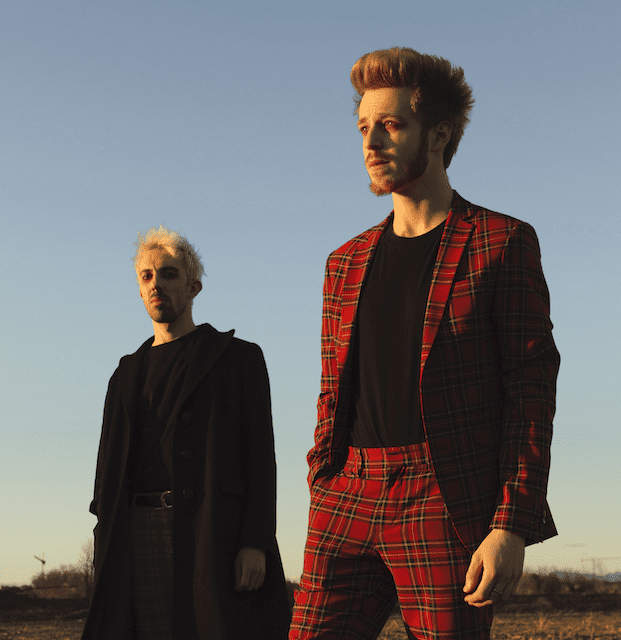 For a duo still fighting to emerge, the current climate of an endangered music industry meant that for Luca and Lorenzo, there was a very real risk that PEAKS! wouldn’t take off. “It was a struggle to come out with this project at this time,” Lorenzo says. It was all going so well, too, with the pair having moved to London after attracting the ears and eyes of management willing to push their music to new levels. “We changed the release for ‘Blackout’ like four or five – maybe more – times. It’s not easy to come out with a project like this and reach the right people without live support; without real connections with your potential fans.”

While PEAKS! is still in its infancy, both Luca and Lorenzo hardly remember a time before music. Lorenzo started on a classical path, playing flute and piano, but it didn’t take long for him to realise he didn’t want to be one sound in an entire orchestra: “I was in need of something different, more powerful, to express myself in a different way.” It was then that his lifelong love affair with guitar began, which allowed him to experiment with sound in a way the rigidity of classic instruments wouldn’t allow.

Luca, however, had always known the guitar since his earliest childhood memories. The bass was almost an extension of his father, who played in bands and passed on that vigour to his son. Raised on a diet of Led Zeppelin and The Beatles, it stoked his appetite for guitar music twisted in a leaner, sharper beast. “Whoever I am today,” he says, “it’s because of music.”

The two always knew each other having been in bands on the same scene, but it was the commonality of a shared passion for experimentation and using music as a tonic for the chaos of the world around them, which planted the first seed of PEAKS! “Music was always a way out,” Lorenzo shares. “It’s something you can rely on when life fucks up. It gives you energy, it gives you power and the strength to go on in your day-to-day life and reach goals, because we’ve all been through heavy stuff. In this weird time, we’re relying on it more than ever to help us feel lighter.”

While it’s true that lockdown has given us the space to reconnect with our creativity, for PEAKS! – like many of us – it can feel that the detachment from the world has limited, rather than broadened, their horizons. “Maybe when you have free time, it’s not the right time, if you know what I mean?” Luca observes. “It’s really hard to stay creative and have ideas. I’m finding it challenging to write something – or to find something to write about, for that matter – because nothing is happening during this weird time, so you find yourself writing about quarantine and how you feel stressed out about it, and not much else besides.” But, he acknowledges, it’s allowed them to have the time to play around for the sake of fun, rather than working of music as a means to an end. “You have more time to realise ideas.”

Both Luca and Lorenzo envision their music to fit into the dystopic world of Black Mirror, combined with the explosivity of the likes of Transformers: The Movie. Luca would go to the cinema repeatedly to see the film for its soundtrack, which featured Smashing Pumpkins, Disturbed and one of PEAKS!’s biggest inspirations, Linkin Park (“and Megan Fox!”, Lorenzo chimes in). Trying to reconcile the real world with the dystopias he discovers in movies, Luca finds himself connecting the dots long after he’s written a song. “Like with ‘Blackout’”, Lorenzo points out, “you saw the future.”

Though the duo are still cutting their teeth, they know that “success is more a feeling that you have inside – a state of mind, rather than something you can actually see,” Lorenzo explains. “There’s always a downside when your life is put in front of everyone,” Recalling the deteriorating mental health of the late Chester Bennington, Luca says, decidedly, “There’s always something hidden. It’s not about money, or fame, but staying true to yourself. The greatest success is live every day doing something for the love of it – everything else is just a bonus.”