No (Doesn’t Mean Convince Me): Naz & Ella’s new single about consent that you need to hear

In an age where women still can’t walk alone at night without fear of being murdered, Naz & Ella bring a powerful song about consent. Anger, affliction, attitude: ‘No (Doesn’t Mean Convince Me)’ is a track that we all need to hear right now. It perfectly captures the exhaustion women have felt in the past few weeks following the devasting death of Sarah Everard and the brutalising of peaceful protesters by the Met Police. This is a song that could soundtrack the Reclaim The Streets movement. 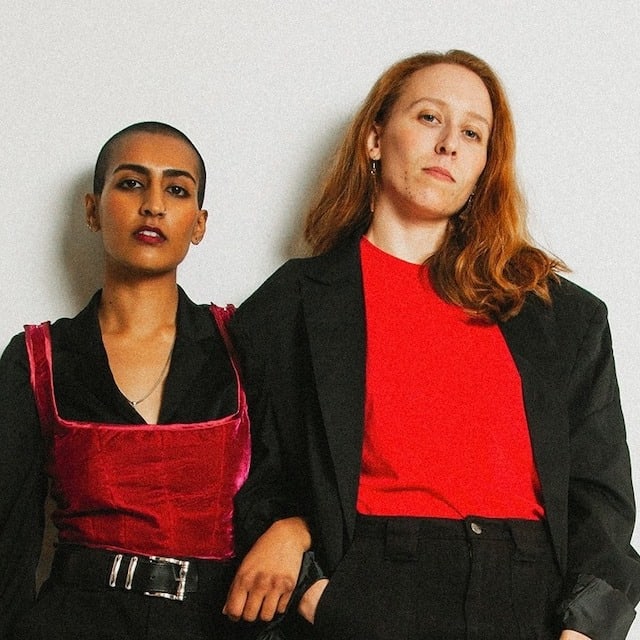 Self-described as alt-folk but transitioning into alt-rock, the London duo’s new track pulsates with punk energy. From their upcoming EP ‘(De)humanise,’ Naz Toorabally and Ella Patenall’s latest release is a powerful rallying cry for people against predators, particularly the predators who prey on people in the nightlife environment. As a female who frequented bars and clubs pre-pandemic, Naz’s lyrical expertise utilises imagery that paints an all-too-familiar scene that strikes a chord with me personally. And I know it’s not just going to be me who can see it all taking place vividly. The recent statistic that 97% of women in the UK have experienced sexual harassment isn’t even shocking for most of us. Every club night is often tainted by the touch of a perv or by the unnerving look of a group of men on any bit of bare skin. Harassment has become routine – expected even, but it hasn’t become any less acceptable. It hasn’t become any less deplorable. Naz & Ella’s new single serves both as a challenge towards predatory behaviour and solidarity towards those who are hesitant about defying the approaches of someone out of fear of being met with hostility.

Beginning with a grunge guitar riff that is reminiscent of Nirvana’s Come As You Are, the track is then flooded with Ella’s haunting harmonies that glitter like girls’ eyelids on a night out. Leading on from this, Naz’s lead vocals defiantly deliver lyrics that brilliantly captures the fuzzy atmosphere in bars and clubs: “Lights out/ Under a veil of darkness/ Haze of alcohol / Feel your eyes /Following me.” There’s something almost PJ Harvey-like in the alliterative final two lines; the first verse is chilling – unnerving even. Though relatively simple, the lines unhook vivid memories of my friends and me being stared down in clubs by creeps.

Ella’s vibrato guitar backgrounding the verse beginning ‘I’m a person you’re a predator’ is borderline funky, it adds the perfect amount of texture and lightness to a dark, brooding song. After the second chorus, Ella breaks out into a classical Italian style of guitar solo that could fit into a Tarantino soundtrack with ease. The solo is almost hypnotic, with the melody mimicking the sound of a Spaghetti Western.

Feminine and firm, the voices blend together to create a feather-lite sound with silk-like smoothness. Delicate but defiant, the haunting, almost ghoulish whispering in the repetitive verse beginning with “Sexualised then demonised when we don’t reciprocate” eludes a similar mystique to that of The Cranberries. Though the track is more folk than rock, the lyrics are laced with a riot grrrl energy and grit.

Simple, repetitive, strong: the chorus leaves no room for misinterpretation. The lyrics ‘No (doesn’t mean convince me)” is repeated four times as a statement not up for discussion. The principle flickers in the song like a hot flame, burning the fact into our heads. Layered recordings of Naz & Ella’s vocals perfectly mimic the unity of group of people protesting the subjectivity of ‘no’; the crowd-like chanting effect is eerily evocative of the distraught voices of crowds at Reclaim The Streets protests.

Their choice to end the song with the lines “How many times do I have to tell you to leave me alone?/ Didn’t you hear me the first time?/I said no” as spoken rather than sung is an incredibly effective one. Switching to a spoken tone draws us away from the beautiful, melodies that carry us away during the song and back to the unsafe reality that women are confronted with on a daily basis.

This duo is one to watch. Naz & Ella are fighting rape culture with unflinching fervor.

No (Doesn’t Mean Convince Me) is out on 24th March 2021 and is the second of two singles off their forthcoming EP (DE)HUMANISE. Naz & Ella continue the tough conversation about sexual harassment on their podcast ‘Not Another DIY Music Podcast’ and will be releasing a music video to celebrate their new track on YouTube.

You can watch the music video here:

You can listen to their new single here: