What happens when you put together members and former members of hardcore punk and metal bands? You get the amalgamation of sludge metal giants that is Krokodil. Hurling themselves onto the metal scene in a fiery blaze of glory, the band are set to release their debut album, ‘Nachash’, on November 10. 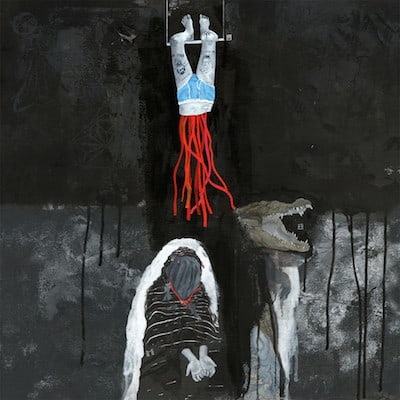 Krokodil is an unholy union of members of Cry for Silences, Hexes, Gallows and SikTh, marrying different sounds together to create one kick-ass, hardcore album. Overall, ‘Nachash’ holds every element of a typical metal album; it’s loud, abrasive and has a healthy dose of distortion and screaming. Bringing together members of different bands to form a new project is a tricky task and one that Krokodil have done well. ‘Nachash’ is its own entity, entirely different from what we might have expected.

Straight out of the gates, ‘Shatter’ is an in-your-face, dynamic track that hits us right away with a distorted guitar intro, frantic drums and throaty vocals. The most astonishing part of this track is the ability to fit so many guitar riffs in under five minutes and still managing to sound cohesive. Although this album as a whole has a lot happening from start to finish, it’s obvious that the band is made up of seasoned veterans of the industry through perfectly calculated riffs and solos and dynamic drums, creating an organised chaos that flows perfectly.

To showcase the precision planning that evidently went into this album, ‘Porcelain Bones’ is a more melodic track that falls perfectly between ‘Reptilia Familiar’, a heavy display that channels classic metal and ‘The Collapse’ which brings out the slower side of the album while maintaining the dirty sound that we love.

The album has a great overall balance with a majority of heavy, thrashing, “typical” metal tracks, countered by the occasional slower song with a handful of melodies pouring out through the guitars. ‘Ragnarock’ is a great example of how the album cuts heavy with gentle to provide that balance. The instrumental piece, coming in at just under three minutes is a haunting and mesmerising tune that lures us in through dexterous guitars and leaves us on the edge of our seat before sliding seamlessly into ‘Sun Riders’ which gradually brings the pace of the album back up.

Fast, loud and a little scary. ‘Nachash’ is a perfect introduction to a beautifully-chaotic combination of musicians, leaving us mildly frightened and whole-heartedly excited for what’s to come in the future.