Yorkshire’s fairytale weaving A.L. Bell is back with another collection of 7 tales, including a play, all told by the enigmatic (and ever so slightly unsettling) Mr Friedman. So, for the second time this year, are we sitting comfortably? Then I’ll begin… 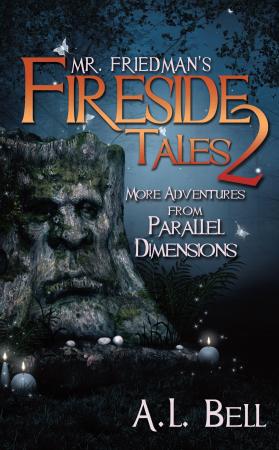 It’s Christmas once again and the Friedman family gather around the aged storyteller for another wild ride through the night. Just a few brave steps into this dense fantastical forest of a collection and you will be struck by the noticeably darker tone than the original. Fear not though, as there is some deft handholding to companion you throughout the book’s duration. This often takes the form of comical and knowing literary asides, such as the assertion that, ‘inheritance is only useful to enrich the lives of orphans’, a statement that will be sure to raise a smile from Dickens fans.

There is a greater focus in this sequel upon the ‘parallel dimensions’ aspect of the stories. The author reminds us with greater regularity than before that these tales are occurring in a world not quite our own. At first this can seem disappointing, as though the author is trying to reject the possibility of such magic existing in our own ‘real’ world. Without going into spoiler territory though, let us just say that, as with the original collection, this is all part of a more complex literary web. The borders between worlds are perhaps not as fixed as they first appear and there is always the capacity for the dimensions to bleed together.

There is also a notable increase in the biblical allegory here, but it is balanced out by the darker tone of the tales – didactic, evangelical fiction a la the Victorian tract authors, this is definitely not. We have angels and a tree of life, but there is no preaching here. The iconography is there for those wishing to see it, but you won’t need a history of Sunday school to enjoy these tales.

Bell has also added some experimentation into the mix here and some of it is perhaps a little more successful than others. The inclusion of full stage directions and a cast list for the included play is a lovely touch and helps to bring the characters into clearer focus. The meta-narrative serving to make the reader take a second look at the characters they’ve become used to only as bit parts in the frame narrative to the 7 embedded stories. There is also the inclusion of some poetry and song within the tales, some of which, when read with a critical eye, lacks fluid scansion and the slightly jarring rhythms detract from the flow of the content. The argument can always be levelled of course that this adds to the authenticity of these elements as they have been created by characters and not the author. Either way, it’s a mild niggle raised merely for need to give a balanced review.

For anyone who enjoyed the first collection, this will provide another welcome leap into Mr Friedman’s marvellous world.