Forget the Olympics, your best bet for a golden moment this month comes in the form of reigning rock champions Yellowcard and their eighth studio album ‘Southern Air’. 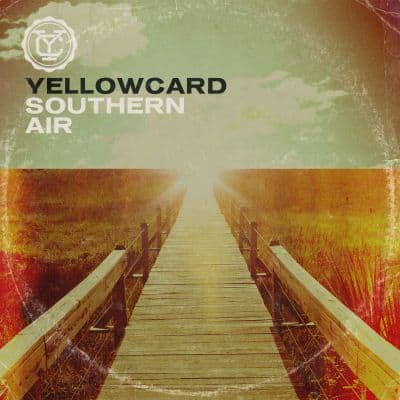 Lyrical chieftain Ryan Key merits the 10-track compilation’s reminiscent positivity to rediscovering his roots, a musical road trip of sorts. Revving up with opener ‘Awakening’, a Mayday Parade meets Motion City Soundtrack pop-punk potluck, the Florida five-piece show off their knack for the crisp production value evident in their latest releases. Sean Mackin’s distinctive violin is along for the ride, winding in between the drum beat to satisfy long-time Yellowcard fans with its melodic, classical style.

Continuing their homage to years of success, the rest of the journey through Neptune Beach territory is pumped with adrenaline left over from 2006 favourites ‘Lights & Sounds’ and ‘Rough Landing, Holly’ – akin to these triumphs, gritty rock essentials and passionate conviction hold tight in ‘Surface of the Sun,’ as the band “show the faithless what we’ve done”. Single ‘Always Summer’ has familiar lyrical punch, an updated ‘Ocean Avenue’, delivering every word staccato and strong in a tune meant to be sung along to. Its catchy, sprinkled-with-sunshine quality confirms Yellowcard’s anthem-making machine is well-oiled and still churning out champions.

Joining the band are friends from Hopeless Records Alex Gaskarth of All Time Low and Tay Jardine of We Are The In Crowd, along with Cassadee Pope of Hey Monday fame, the vocal powerhouses featured on Southern Air’s mournful ballad ‘Telescope’. A twinkling layer of sound coupled with harmonies galore and an endearing echo add tenderness to tenacity as ‘Telescope’ pays respect to a family loss, and acoustic track ‘Ten’ breaks your heart in all the right places. ‘Here I Am Alive’ will be the deal-breaker for a younger, pop-loving generation, the bubblegum track that new fans will gladly bite into, whilst ‘A Vicious Kind’ fuels the reoccurring feel of the band’s journey, reliving memories by bringing them to life and addressing emotional highs and lows.

“Bottoms up tonight” sings Ryan in ‘Awakening’, and essentially the legacy that is Yellowcard has experienced a revival much like this song title, roping in old and new fans alike with ‘Southern Air’’s amicable summer charm, musical retrospect and masterly pop-punk prowess – so all that’s left to say is: We’ll drink to that.

‘Southern Air’ is released on August 13 through Hopeless Records.

You can listen to this album online here.