It’s a tall order for one EP to be all of the following: catchy, heavy, melodic and epic. Yet this was a challenge that A Joker’s Rage had clearly set their sights on with their latest EP ‘Black Sheep’. 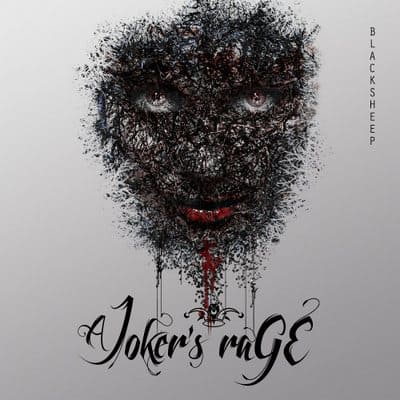 They may aim to cover a lot of ground musically but the songs still flow from one to the next with a consistent atmosphere building throughout. The record kicks off with the dark pop track ‘Bounce’, which is carried largely by its catchiness, and culminates with the deliberately epic ‘Just Another Ghost’.

They seem to want to dip into a wide range of genres as they made room for orchestra, synth, riffy guitars and pounding drums. Why do this though? Vocalist Zakky Boy Taylor explains: “We have fans that are into indie, punk, electro and rock music. We’ve seen kids and much older people dancing to our music. This EP is about our band uniting with its audience.”

So it would seem that A Joker’s Rage are big into experimenting with their music and stage show, which certainly comes through in their overall look. Anyone who has seen pictures of A Joker’s Rage or gone to their gigs will have come to know them by their so-called ‘gamefaces’. Black and white clown-like make up that is reminiscent of Kiss. Zakky says this: “When we’ve got the ‘gameface’ on, we’re dangerous, but when it’s off, we’ll take your granny for a cup of tea! We want to create something that’s just as exciting visually as it is aurally.”

The whole point of the “gameface” is to let the band members create a powerful persona when they are on stage. However, the lyrics on ‘Black Sheep’ seem to be intended as more of a gateway into the band members’ souls. And the over-riding feeling is bleak. For example, ‘Temptress’ is like a boy-meets-girl story that ends badly and the title track ‘Black Sheep’ follows the idea of displeasure with a group of people and choosing to remain an outcast.

Indeed, Zakky Boy Taylor said that the lyrics, and even the record as a whole, came out of a dark time when it seemed like the only way out was to put pen to paper. ‘Black Sheep’ is about striking a balance between the chance to unleash a concoction of creativity and rage while putting out what their fans want to hear. They hit at different niches in genre with their music, while letting out some inner demons with their words.