Film Review: ‘Before I Go To Sleep’ [City Screen, York]

Having made the total stinker that was ‘Grace of Monaco‘ Nicole Kidman was in desperate need of a film where she returns to her magnetic best in order to help us forget that catastrophe. Luckily director Rowan Joffe’s ‘Before I Go To Sleep’ is that vehicle where, bolstered by a strong cast around her featuring the likes of Colin Firth and Mark Strong, she throws herself completely in to her role as Christine Lucas, a woman for whom an accident has meant that she suffers from memory loss to the extent that her memory resets each day. Joffe uses this concept well to utilise the common conventions of the thriller genre as he creates a truly edge-of-your-seat spectacle that makes up for its absurdities with a really strong atmosphere, aided brilliantly by Edward Shearmur’s score. 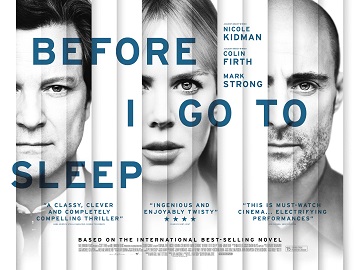 Joffe has previously been a very hit and miss director, with the enjoyable 28 Weeks Later being his best piece of work up to now since follow-ups ‘The American’ and ‘Brighton Rock’ were both lacklustre and aimless, both despite strong casts. In this case the film is anything but, and it feels stripped down and tight from the very beginning, its short 90 minute runtime allowing it to pack in the tension and the thrills without much filler. The script, also by Joffe and based on the eponymous novel by SJ Watson, is intelligent if somehow aware of its own farcical nature, but the film is so atmospheric in a Hitchcockian sense that it doesn’t matter. Many may call the film a cheap imitation of some of Hitchock’s works, and while it’s certainly the case that this film is never going to subvert or variate from genre norms, it’s not the case that it’s just some sort of cheap Hitchcock knock-off. It’s a film that wears influences on its sleeve but just follows the line, it doesn’t seek to stamp its own ground in the genre, but seeks to do the genre well, and it definitely manages that.

Colin Firth and Mark Strong do provide considerable aid in making it captivating, both doing a brilliant job of adding to the mystery, leaving it open-ended until the latest possible moment.  All the actors are provided license to really show off by a script that ensures that never once are your eyes drawn away from the spectacle, they never once have to work to make it an enjoyably tense watch, and that effortlessness brings with it more believability. Shot wonderfully by cinematographer Ben Davis who milks every scene for as much tension as possible which he succeeds in doing with the help of the aforementioned Shearmur score with its shrill noises and pounding, continuous strings.

‘Before I Go To Sleep’ is a welcome return to form for Nicole Kidman who can put her previous film behind her, and also for Joffe who has created what may not be a groundbreaking piece of work in the vein of something like ‘Locke’ and won’t make a huge impression on the genre as a whole, but is an example of how to make a structured thriller with the right amount of jumps, twists and turns to keep your attention. Plus, it’s hard to resist Colin Firth’s beautifully coiffured hair, a wonder in and of itself.

To see what time the film is showing click here