It’s not often that you get films so eager to outdo each other in their awfulness in similar ways. Last year, Naomi Watts starred in the disaster that was ‘Diana’, a film that was so inoffensive and inept it ended up being offensive in its boringness and this year, Nicole Kidman, not be outdone, has done exactly the same. Not only are we treated to another shallow biopic about a put-upon princess who simpers and stammers her way to true ‘self-confidence’ but director Olivier Dahan, who has previously made quite a successful biopic in the shape of ‘La Vie En Rose’, seems keen this time to dial everything  up to eleven, delivering the cheesiest of emotional stories that’s so dull its 103 minute run-time lasts days, every check of the watch transforming in to a moment of existential despair and you start to notice that you’re yawning every ten minutes.  When your body rises up in active protest against a film like that, you know what you’re watching is a true clanger. 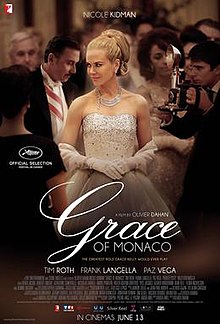 That’s not to say that the performances are totally diabolical. They’re definitely below average for all concerned, but Nicole Kidman does her best to bring Grace Kelly to life on the screen, but only succeeds in portraying a caricature of a princess, entirely uninteresting in almost every way. The problem is Arash Amel’s script, which forces her to come out with lines that inspire nothing but embarrassment and a sense of longing for a script that doesn’t feel like its been hastily drawn up after too many missed meetings on a dreary Sunday morning. It’s truly inspirationless and affects all the actors immensely, from Tim Roth’s ineffectual Prince Rainier to Frank Langella’s absurd priest, whose advice is so inane that when Kidman’s Grace professes her love for him you come to wonder whether she’s sane enough to decipher lines to the tune of “you must act like a princess” are as mundane as saying “you must wake up to go to work”, and ultimately decide that it’s a massive façade and that she secretly hates the priest, vowing to kill him if it’s the last thing she does. Concocting kitschy crime plots like this at random intervals in the film makes it a much more interesting experience, but providing yourself with amusement is really something you shouldn’t have to do in a cinema.

Dahan does know how to make the screen look good and captures the light brilliantly in a few shots of Monaco’s glimmering cityscape, but continuous close-ups of Kidman’s face grow wearisome, and it feels like he’s obsessed with showing you that Kidman is his star, throwing in a close-up every time he thinks you’ve forgotten about her quivering lip and stiff eyebrows. He fails to generate any sense of empathy with any of the characters beyond these surface shots of glamorousness, and fails to make us sorry for Monaco in its constant attempts to avoid making its citizens pay tax, speeches about ‘liberty’ falling horribly flat. It’s an abject, sorry failure to dig in to the life of quite an interesting woman, and it’s easy to feel sorry for a floundering Kidman, but ultimately it’s a case of being worse than the sum of its parts, and the fault for that must lay squarely at the feet of Dahan. You’d be much better off throwing the price of a cinema ticket squarely in to the bin, and whistling away happily, rationalising in your head that you’ve paid not to see ‘Grace of Monaco’. Good call.