If you’ve not heard by now then you’re missing out – punk rock superstars The Bronx has an alter-ego, and it is suited and booted in true invincible Charro-style. Like the punk background to which they’re accustomed the Mariachi styling’s come with their own set of rules to be learnt and the band did this on tour stops, ceaselessly using YouTube videos to shape the craft of which they are now masters. 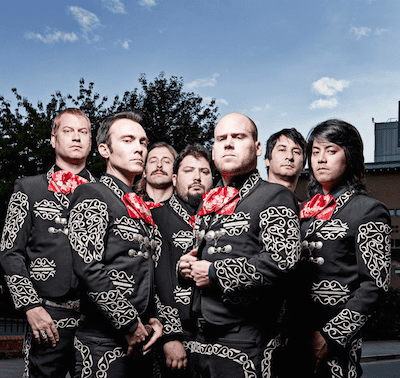 They took to the Brooklyn Bowl stage bounding with energy to deliver Right between the Eyes bravely from the new album to a pre-roused crowd. Twisting the electronic with traditional, they blend the full range of brass and strings together seamlessly with a certain spaghetti western aplomb. They drew the room into the pace of the evening introducing the Latino swagger of Cellmates which delivers not simply for the valentine sweethearts in the room. Even singer Matt Caughthran’s over usage of certain expletives couldn’t detract from the fact that they are a seriously talented bunch of musicians. Their musical dexterity is ever-evident in the jaunty drums and fluid strings of insatiable love song 48 Roses and the upbeat Norteño Lights.

Mariachi El Bronx delivered value for money with hits ranging from all three albums, with the crowd seemingly gleaning the most pleasure from the “oldies” – the dramatically sensual Holy, a love song for the jilted Fallen and the downbeat Matador. A lengthy set to please the old school fans saw the floor thinning towards the end for the dancing folk-fused, encore of Revolution Girls. That said, even on a typically grey day in London they have the uncanny ability to bring the spirit and sunshine of Mexico to the stage. With their ten year anniversary of The Bronx and three albums under the Mariachi brand marking the year they’ve definitely found longevity in differentiating themselves.