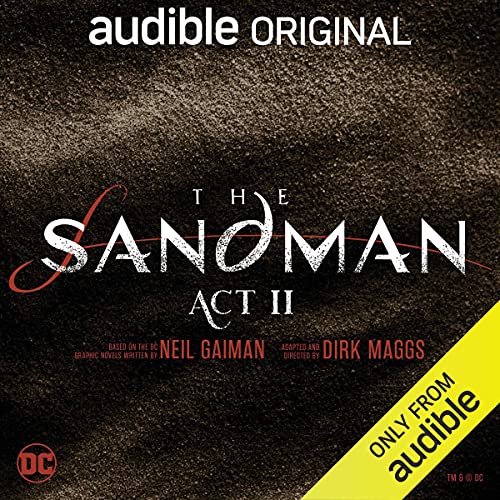 Dirk Maggs and Neil Gaiman are set to strike gold yet again, with The Sandman Act II to release, exclusively on Audible, on the 22nd of September 2021. Act I was a massive success last year, with critics, fans and casual listeners alike universally loving the dream project. Act II promises to adapt volumes 4 (Season of Mists) and 5 (A Game of You) of the comics in their entirety, and the majority of volume 6 (Fables & Reflections).

Act II features most of the returning cast of volume 1, with surprise additions Brian Cox as Augustus, John Lithgow as Emperor Joshua Norton, Emma Corrin as Thessaly, Joanna Lumley as Lady Johanna Constantine, Miriam Margolyes as Despair, Bill Nighy as Odin, Kevin Smith as Merv Pumpkinhead, Jeffrey Wright as Destiny, Niamh Walsh as Nuala, David Tennant as Loki and many, many more. Tennant’s is one ‘Loki variant‘ we are extremely excited about!

The full cast of The Sandman Act II.

“Enter the Dreaming again as the blockbuster audio adaptation of “the greatest epic in the history of comic books” continues in The Sandman: Act II. James McAvoy returns to voice Morpheus, the Lord of Dreams, in this sequel to the #1 New York Times audio best-seller. Journey into a world of myths, imagination, and terror based on the best-selling DC comic books and graphic novels written by Neil Gaiman (returning as the Narrator), and lose yourself in another groundbreaking, immersive drama adapted and directed by the award-winning audio master Dirk Maggs.

Just close your eyes and listen again as the greatest epic continues.” – Audible

The Sandman Act II looks to be even more epic than Act I, a feat Neil Gaiman, Dirk Maggs and co should be incredibly proud of. Both men are absolute masters of their craft. Gaiman is considered to be one of, if not the, best authors of today. Having mastered novels and graphic literature, pioneering mature graphic literature with The Sandman, Gaiman is well versed with engrossing, fulfilling storytelling and world renowned as a British national treasure. Dirk Maggs revolutionised audio-based storytelling and has worked in audiobooks, radio plays and radio broadcasting for a very long time, garnering multiple prestigious awards for his contributions to culture and media. Maggs pioneered comic book adaptations to radio in the modern era, and Sandman Act I seemed to be the greatest, most extravagant and ambitious of them, but it seemingly pales compared to what we have in store for Act II. Dirk Maggs is known for his revolutionary work, and it would appear he has no intentions of slowing down, with The Sandman Act II poised to stand as the new pinnacle of audio storytelling. With great minds such as Neil Gaiman and Dirk Maggs, and Amazon’s financial fountain, Audible’s The Sandman is an experiment in what can be accomplished with the absolute best resources available, and it’s only getting better.

“Dirk Maggs has revolutionised how many consume media and positively morphed audiobooks into the platform it has become today. Maggs has worked on Gaiman projects before, including ‘Stardust’, ‘Good Omens’, ‘Neverwhere’ and ‘How The Marquis Got His Coat Back’. It was only a matter of time before Maggs and Gaiman teamed up to give us Sandman, a project over thirty years in the making and something you should definitely check out.” – Soundsphere magazine’s Graeme Small on Dirk Maggs in 2020

In recent years, some cinematic adaptations of DC Comics’ material has been heavily criticised by the mainstream media and a number of fans, with Marvel leading the way with their generally favourably received entries into the Marvel Cinematic Universe. In terms of other platforms, however, such as video games, television, animated movies and more recently audiobooks, DC Comics have boasted great success. While it can be fun for some fans to enjoy a rivalry of sorts between the ‘big two’ publishers, those who unashamedly enjoy both must be rejoicing in the sheer amount and quality of content available from both. With good competition comes great reward, and we suspect The Sandman is an indirect product of this relentless, competitive sport the corporations are playing. The Sandman is an inevitable project that was bound to happen eventually, but fans of this sort of storytelling, be it comic books or graphic novels, or adaptations of them, enable the likes of Amazon to invest so heavily into dream ventures such as this, and it’s the fans that reap the rewards.

Our coverage of Act I can be found here, and Act I can be purchased here. Act II, due on the 22nd of September, can be preordered here.

Behind the scenes clip from The Sandman Act I. Copyright DC Comics and Audible, 2020.